Fury of the Demon (Kara Gillian Series #6) by Diana Rowland 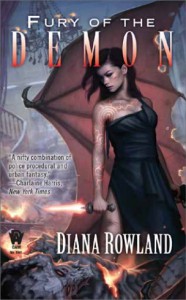 Kara and Mzatal are desperate to find Idris before the coalition of Lords holding him use him for whatever nefarious plans they have. After months of training in the demon world, she has to follow the trail to Earth, reconnecting with all her old friends – and dealing with the changes they’ve made in her absence
But retrieving Idris is far from simple, even with a demon lord as powerful as Mzatal – great power means little if there are innocents in the cross fire, and less when you don’t even know what sinister forces you’re opposing. Even more complicated, Ryan’s cover for the exiled demon lord Szerain is cracking and Zack, one of Kara’s greatest friends, is torn with his loyalty to Rhyzkahl, Kara’s greatest enemy; can she even trust him any more? And what about his relationship with her best friend, Jill?
And under it all, Rhyzkahl and his fellows are still determined to have Kara.
I could see the disaster racing towards me and, like all the best horror movies, I just couldn’t stop it. It seemed simple, just a little reading before going to bed.
At 2:00am I was still reading. I knew I should put it down and go to sleep, that would be sensible.
At 3:00am I was still reading. Things were getting dire, all common sense dictated I should put the book down… just one more chapter.
At 4:00am I had actually tried to go to sleep 3 times but each time I made some easy excuse to read just one more page
I was saved at 6:00am, when the book ended. Though I did have 10 minutes of shocked disappointment that it did end. Who said it could end?
There, it’s awesome – go buy it.
What you want more detail? Fine. Let’s start with a quasi, almost, sorta criticism. This book actually starts fairly slowly – so slowly that, for a brief, terrible moment, I suspected this may not be as toweringly awesome as the previous books in the series. But there is a reason for that slowness – there’s a lot of recapping and reminders, telling us who everyone is, the demons, the world, the various magics and the many events that have come together to get to this point. It’s a problem that can hit any book series once it gets past book 5 and especially for a series where we have moved and changed so much since the first book. Normally I’d say just to not bother, recapping 5 books worth of content in a few chapters never works – but in this case it isn’t even recapping for the sake of recapping – all of this vast amount of information was relevant to the plot in this book. Much as it made for a slow start, I can’t say the recapping was unnecessary.
Because the plot was involved – it was another excellent investigation with the usual problems of multiple threads, looking for leads and chasing down distractions all done in an excellent style. I’ve said it before and I’ll say it again, it’s hard to write a good investigation that doesn’t devolve into either action sequence after action sequence or into long periods of dullness waiting for something to happen or naval gazing. The plot also involved everything – the world, the demons, the magic, the events that have happened to date, pretty much all of the events, just about every character that has been a major part of the story – it was all there and it was all needed and all blended together excellently.
The simplest thing I like about the plot? It worked. It didn’t need people to suddenly have the common sense of guacamole to advance. It didn’t need people to break character. We didn’t have convoluted, ridiculous plans or miraculous chance or sudden spawning new super powers – it worked without any clumsy, silly author cheats to MAKE it work.
And that all works even better because the world is so rich and fascinating. The different demons, the new concepts that were introduced in the last few books in the demon realm, the demon lords and their fraught and complicated relationships, the issue with the hidden demon lord Szerain, the complicated and elaborate magic system that is solidly fleshed out all come together to make me positively revel in this world. It’s original, it’s completely unique in fact, it’s elaborate and it’s fascinating. And it’s growing and developing! In particularly the nature of the Demankh and what they mean for the world and the Lords suggests vast depths we haven’t yet touched – there’s always more to discover!
I also love the characters – especially Kara. Kara has grown and changed and developed so much from the woman we saw in the first book. Obviously her magic and knowledge of magic has changed (but I have to say how refreshing it is to see a character grow into more power through hard work and dedication rather than just spawning new shinies from their own inherent specialness) but her outlook on life, the way she looks at demons, the way she deals with crisis, her relationships with her friends and family; all of these have grown. In particular I love how she is now very much connected to the people in her group – how she has evolved from reluctant loner to someone whose life is enriched by the people she values being part of it. It didn’t just happen – it has been an excellent, gradual development. She’s also not emerged unscathed – she has suffered trauma and she has worked through it – but she is still scarred and touched by it, it still makes a part of her character and still shapes her.
Read More
Source: http://www.fangsforthefantasy.com/2014/01/fury-of-demon-kara-gillian-series-6-by.html
Tweet