Side Jobs: Stories from the Dresden Files 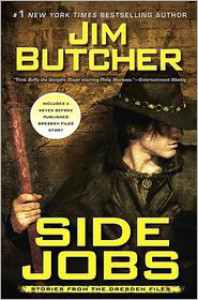 I approached Side Jobs with a degree of caution and a firm determination not to let my own biases sway me. See, I don't like short stories. I don't. I don't even like stand alone novels all that much. I like great big epic series with huge great meta plots and development and drama and on the edge of your seat excitement.And while all those are possible within the confines of a short story, they're usually not there. I was especially leery of reading a Harry Dresden short story simply because the best thing about these books is the epic within. I don't think I've read an author that can match Butcher for the epic – but nor do I think you can build up to good epic in a short story.And there was some mixed quality here. The stories were from every period in the series and while most of them were a hit (above and beyond what I expected), some missed badly. Restoration of Faith was pretty dull and clumsy and the second story Vignette isn't even a story. I actually wasn't too fond of many of the short stories that had Harry as a main protagonist because they kind of involved Harry just, well, doing what we've seen him do throughout the books but generally a bit more casually because this is his daily bread, as it were. And while it's nice to see his daily bread, it's not exactly a revelation – and with a good maybe 7 out of 11 of the stories being these daily bread style tales? None of them really adding development to the world, story or characters?I think I'd have greatly enjoyed them in anthologies of other books where they were originally – if I was new to the Dresden Files they'd give me a sense of the world and intrigued me more – but put together we just get a series of “and this is a day in the life of Harry. And this is another day in the life of Harry” stories.Not to say these stories aren't worth reading – they're amusing and interesting and have the same fun, great style I love in the books – and we do get some background information filled in on Gard, Michael and Billy and Georgia, albeit not exactly vital information. And “Harry's Day Off” is hilariously funny and it's probably worth reading for that alone. But they're not special, y'know?Read more
Tweet