Revealing Eden (Save the Pearls, Part One) 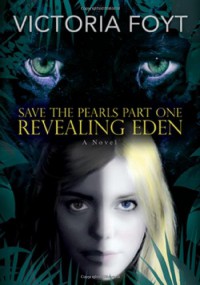 As you can see, Eden Newman, the protagonist is a White woman who wears blackface. Eden does this because from a post apocalyptic earth, where Pearls (read: white people) are oppressed by Coals (read: blacks). Because of the higher levels of melanin, Coals were better able to survive the harmful suns rays. "Of course, the dark races got The Heat too, but not nearly as often. The higher amounts of melanin in their skin protected them from the sun's radiation. Since their numbers hadn't been decimated in the Great Meltdown, as the other races had, they now ruled the planet." [page 14]I cannot begin to tell you how horrifying the very concept of this book is. How this White woman thought this role reversal would read as anything more than appropriation and racism is absolutely beyond me.Foyt even goes as far as to include a scene where Pearls perform in White face. "On the main stage a band of Coals performed in Whiteface. Eden's sensors told her their name: The Lost Caucasian Tribe. [page 40] So it's not bad enough that we have a protagonist tromping through the majority of the book in Blackface and whining about the fact that she is White and no-one sees the real her, but Foyt decided to appropriate Blackface. In this scene, those performing weren't othered and it did not read as a minstrel show. There was no historical meaning to this supposed whiteface and it only served as yet another reminder of Hoyt's racial ignorance.Asians are referred to as "Ambers", which essentially calls their skin colour yellow and is offensive. We are told on page 11 that Pearls is the racist name for Whites, yet this is the word that Foyt uses for the entire book to describe White people. They are also referred to as "earth-damned Pearl" and "White death." Suddenly this reversal of power means that there are racial slurs which effect White people and futuristic or not, this flies in the face of human history. It is further troubling that though we are told that the term Pearl is indeed a slur, so is Coal. This tells me that Foyt has no idea how a slur really works. A dominant group is not effected by a slur and the fact that she chose to give slurs to every racial group, undermines the supposed superiority that Coals have. If Coals were the oppressive force that they are supposedly cast as, Coal would not be considered a slur, just as honky, gringo, cracker and paleface aren't slurs today.Read More
Tweet