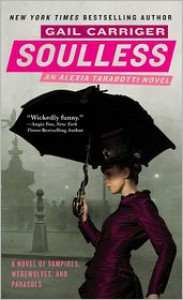 Miss Tarabotti is a proper Victorian lady. The daughter of upper class, proper British society with all the refinement, expectations and proprieties that entails.She’s also a spinster at the grand old age of 25, cursed by her Italian father to be too dark, have too bold a nose and far too bold a tongue to ever fit in proper, elegant, high society. Miss Tarabotti is also Soulless. Soullessness is a trait that she inherited from her Italian father and like everything derived from him is considered without doubt to be a negative.Unlike vampires and werewolves who have an overabundance of soul which grants them numerous special abilities, Miss Tarabotti’s lack of soul causes her touch to counteract their abilities, rendering them no more powerful than a normal human being. It should be noted that soulless people are far more rare than supernatural creatures, in fact she is the only one in Queen Victoria’s London, and at one time were used to actively hunt down paranormal being. And this, coupled with her highly inquisitive nature and wide reading, leads her to explore this paranormal steampunk world to discover the fate of several missing vampire and werewolves - as well as the origin of brand new vampires that seem to have come from nowhere.I have to say before anything how much I love the language of this book. It really does set the scene for a paranormal steampunk and I’ve not read one before that had such a powerful sense of era. I would be remiss if I did not point out that if one is unfamiliar with the vocabulary of time period, it could make for difficult reading or at the very least plenty of trips to the dictionary. Though the writing itself is extremely descriptive, it never rises to the level of florid.Miss Tarabotti was a very appealing character to me. She was very strong, assertive and had a lot of her own agency and complete unwillingness to be ruled - yet at the same time always fit her position and time period - and it’s actually hilarious (seriously, I laughed out loud) to have this extremely sassy, assertive, sarcastic and witty character express herself entirely in the formal, flowery language of the Victorian upper classes. She has a lot of agency and, for once, very little spunkiness. We had all of this power and pressure on her to conform, to be a proper, respectable lady (and a spinster) which she constantly resisted. She managed to assert more agency than we have seen in protagonists of modern urban fantasy - without ever losing her sense of time and place. It was a very elegant characterization.Read More
Tweet