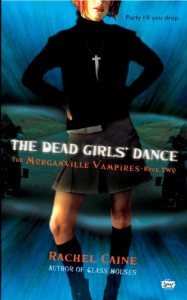 At the end of the last book, Glass House, Shane called in his father in a desperate attempt to save them from the wrath of Morganville's vampires. Of course, they managed to escape that wrath by earning the support and protection of Analee, the Founder of Morganville who had enough clout to keep them safe.The problem is, Shane's father and his vampire slaying biker gang still arrived. And they're still looking for blood and they don't intend to leave without slaughtering as many vampires as possible, preferably all of them. In fact, it seems this was Shane's reason to return to Morganville anyway – to gather as much intelligence as possible in the eventual attack.Shane's father instantly launches a path of destruction, killing vampires wherever he can. Worse, he has no concern for collateral damage and his gang does not hesitate to kill humans who look like vampires – even resorting to kidnapping humans to follow their plans.And worse still, Shane is quickly implicated in the killings. The penalty for vampire slaying in Morganville is being burned alive. Claire, Michael and Eve must find a way to convince the vampire authorities that Shane is not guilty and they should spare his life.Like the first book, one of the biggest barriers I found to enjoyment was the utter foolishness of the characters, especially Claire. See a dark and shadowy alley that 3 people have now told her not to go down and what does she do? Why down she goes.Read More
Tweet