Death, the Devil, and the Goldfish 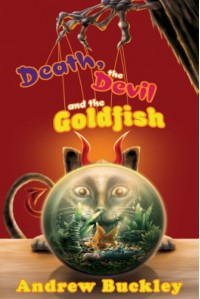 The devil has made a deal with God and gets to spend a week on earth. Unfortunately for the devil, the body he had arranged to inhabit is not available, so he is forced to inhabit the body of a cat. Things get worst for the world when the Angel of Death is then convinced by the prince of darkness into quitting in a drunken rage. So, not only is the devil free to run amok but people can no longer die. Then there is a thing with evil elves and a penguin who becomes human. If this sounds confusing trust me, it will all become clear when you read this book.As I was reading this book, I kept wondering how I was going to review it. So much happened that at times I felt that it was headed nowhere and had no discernible plot. To add to the problem, I don't even think I can say that Death, the Devil, and the Goldfish, even had a clear protagonist. The protagonist could easily have been a penguin named Gerald, a police officer named Nigel, or a scientist named Celina. With the importance of Death in story, I'm sure some might argue that the protagonist is actually the grim reaper. The only thing that I can identify for certain is that the devil is indeed the antagonist.Normally I wouldn't even finish a book with this much confusion but would you believe that not only did I finish Death, the Devil and the Goldfish, I loved it? The plot was thin at best and the story seemed to move from amusing anecdote to anecdote. Normally, this would not be enough to hold any book together but Buckley's writing is laugh out loud funny and with each absurdity, I became more and more excited to see where his imaginative mind would go next.How could I not love a story which involved the devil inhabiting the body of a cat named Fuzzbucket and then getting frustrated about having to cough up furballs? Then there is the penguin who shifts into the body of a millionaire, while his body is shifted to a plane where humans worship penguins. There is also the line dancing elves, which of course makes us question how the macerna ever became a popular dance. Also, the very idea of God as a wine waiter, wisely guiding the universe along is absolutely irreverent. It is impossible to read this book and not giggle.Read more