Sinews of the Heart by Cody L Stanford 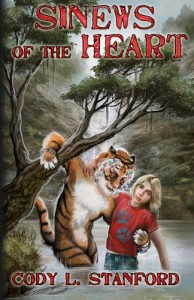 Artifical genetic viruses were a whole new crazy – viruses that changed people into half-man, half-beasts. People could be half-tigers, anthro-wolves another luxury, extreme, but controversial body-modification.
Until the virus got out of control, until it spread – and suddenly huge swathes of the population were changed whether they wanted to or not. War followed and the planet was quickly devastated – humanity on the losing side.
Nikki is living proof that the virus keeps mutating as she was born an anthrotiger and taught by her father to hate and fear humanity. But contact with humanity shifts a lot of their viewpoints – and also causes her father to confront his prejudice towards his own daughter - who insists on calling a son.
The world is an interesting one – I like the concept of humanity meddling with their genes for fun and aesthetics – and the technology getting completely out of control and creating lots of unwanted changes. The Anthros are born, human animal hybrids, and they face a lot of mixed reactions – including a whole lot of hostile reactions. There’s a lot of parallels to real world oppression. Some of it is well done – like reflecting even with the world completely transformed, they still find new ways to be prejudiced (feline anthros vs canine anthros) and how the story of the war is very very different depending on who is asked and how it may just be more complicated than good guys vs bad guys. And some of it less so – there’s a lot of using slurs and elements of real world prejudice for the anti-anthro prejudice (such as using “furf@g”).
This setting presents the backdrop of the character’s growth – challenging their beliefs about both Anthros and humans, working past their prejudices, challenging their heroes – or their monsters.
I think the story, in places, was perhaps more clumsy. I think the world was well set up with a lot of interesting elements but it was ultimately designed to show case the characters and their struggles, especially Nikki, more than it was to tell the story of battle and resistance. It’s a character driven story – and that’s not a bad thing, not even close – so the story is less of the focus and falls along some relatively well travelled grooves; the originality comes from the world setting and the characters not the action itself.
There is a lot of powerful discussion and writing about Nikki’s conflicted view of her gender (I use “her” because throughout she expresses a preference for female pronouns) and her journey of discovery as her narrow world expands to more and more ways of being gender variant, of being attracted to men she starts from a very narrow standpoint and still has the courage and determination to assert her personhood according to the terms she knew. As her world view expands, as she sees beyond the few people she knows, as she learns things are more complicated than she was initially presented, she expands her sense of self in a long maintained story of excellent growth as she learns the concepts and the language that define who she knows herself to be and sees past the assumptions and narrow definitions that she has been challenging and working round. She comes to her conclusion through personal analysis, through deciding what she is and what she will or will not hide
Read More
Source: http://www.fangsforthefantasy.com/2013/11/sinews-of-heart-by-cody-l-stanford.html
Tweet