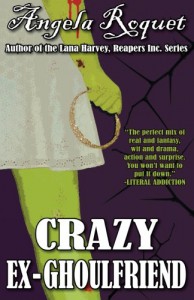 Janie is an outsider, a geek and ostracised at school. But that all changes when Matilda, chief Mean Girl, dies in a car crash.
And then comes back. She has one purpose in life – go to the prom with her boyfriend, Wayne – and if Janie doesn’t help her she will make her life hell
Of course, there’s only one way that Janie can have the influence to make this happen – she has to become the new Queen Bee of the school, the new chief Mean Girl, popular and loved (or feared) by all.
The book requires considerable suspension of disbelief – I know all Urban Fantasy does require a level of suspension of disbelief – but there’s a vast difference between accepting, for example, the existence of zombies and accepting that a 17 year old girl would come home to find a rotting corpse in her bed and treat it as a minor irritation.
There’s a lot of that through this book – reactions are just off, people accept the existence of zombies just a little bit too easily and too quickly (to the point of making out with a rotting zombie for lots of “ew ew ew ew I didn’t need to read that). Her best friend in all the world starts shunning Janie with astonishing speed.
Her old enemies become friends with Janie ridiculously quickly. I know the whole point of the book is slowly winning these people over – but I would expect it to be slowly, not for them to latch onto their old bullying target on the first day she wears a different pair of shoes. The speed and ease of this transformation kind of undermines the entire plot of the book (which is on pretty shaky ground to begin with). The whole premise of the story is that Janie, bullied and ostracised school nerd, needs to become Queen Bee with training from the ex-Queen Bee’s zombie for a convoluted reason. This is the core of the book – and it was too easy. She launched from complete outsider to part of the It crowd with a new pair of shoes and some make up and a very small attitude adjustment.
That not only adjusted the plot but also went a long way towards damaging Matilda’s character. Yes she was a classic Mean Girl (points for “Matilda the Hun” that was good) but part of her character development wasn’t just that she wasn’t all bad, that she genuinely cared for Wayne and that Janie could see her parents and why that reflected in her – but also that Matilda was actually skilled and intelligent. Not in the same way that Julie was, but in her own way, recognising people’s cues, knowledge of fashion and make up, knowing how people react, knowing each person’s motives and ways to reach them – Matilda was shown to be fiercely competent in a way that very few books manage to portray. But you can’t hold up Matilda’s surprising skill and then have it be so easy.
Still, the idea is sound and the methods are somewhat fun and it makes for an amusing, if not as good as it could be, story of hijinks and shenanigans. The main character it’s awful – though I think much of her predicament comes from being unwilling to get Chloe, her best friend, in on the big secret. It also takes a while for me to like her since the story opens with her basically dancing on Matilda’s grave (before she’s even buried) and making plans to go to the dance with her boyfriend. That took me a while to get over and come to not entirely dislike Janie
Read More
Source: http://www.fangsforthefantasy.com/2013/11/crazy-ex-ghoulfriend-by-angela-roquet.html
Tweet