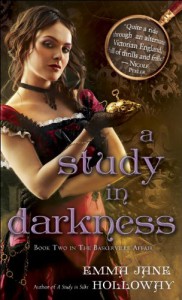 Evelina Cooper has lost everything that is important for her.  Forced to remove herself from society to endure her grandmother's attempts to find her a husband, Evelina still aches over the separation from her best friend, and the loss of the two men that she loves.  Little does she know that soon she will be drawn back into the world of intrigue when a bomb goes off at her uncle Sherlock's flat. Evelina will soon find herself forced to work for the nefarious gold king as all around her, ladies of the night are being murdered most brutally.  For the first time, Evelina is also tempted by black magic when she works closely with Magnus.  So much is at stake and Evelina quickly realises that will have to risk all, if she is to have any hope of saving the people she loves.

I must admit that I am a bit of a fanpoodle when it comes to this series and my only real regret is that it the Baskerville Affair only has three books.  It is so easy to lose one's self in the story and the strong steam punk aspect that Holloway has infused into this series.  The writing is very vivid and the pacing could not be more perfect.

As protagonists go, Evelina is absolutely selfless.  She is intelligent and extremely empathetic.  With everything going on, it would have been very easy for Holloway to turn Evelina into a spunky agent but she very directly has Evelina avoid this by thinking through each aspect of the challenges presented to her.  Sherlock could have overwhelmed Evelina but instead, he forces her to challenge her assumptions and think through each lesson that she has learned.

A Study in Darkness has a strong class element in that Holloway explores what it is like for those who were not born into privilege.  This is a rare element in steampunk as much of it is focused on the upper classes and drawing room intrigue.  People do what they need to do survive at the hands of those determined to horde all of the wealth for themselves.

A Study in Darkness includes a new twist on Jack the Ripper.  Normally when it comes to sex trade workers, there is a lot of slut shaming but Holloway makes it clear that these women are forced by circumstance into their trade and actively asserts their humanity and right to live a life free of violence.


Women in this series are strong and even the constantly ill Imogen is made of stern stuff.  Imogen is very aware that her father plans to marry her off to a steam baron and rather than consent to a marriage with someone she can barely stand, Imogen attempts to elope.  It doesn't end well for her but even in the worst of circumstances Imogen does not give up.  Imogen does not have the skills of Evelina but rather than waiting passively for rescue, she looks around for a way to defend herself.

I know that I have fanpoodled and that even the greatest jewel has some sort of flaw.  A Study in Darkness did engage in vicious unnecessary fat shaming when it came to King Coal.