The Lost Prince (Iron Fey #5, Call of the Forgotten #1) by Julie Kagawa 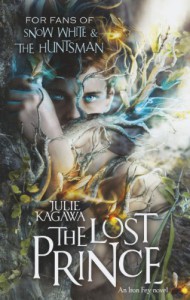 Ethan, brother of Megan Chase, the Iron Queen, has spent his life hiding from the fae and hiding that he can see them. When they notice him, chaos ensues. School buildings are destroyed, people are hurt and he inevitably lands him up to his neck in trouble
This has left him friendless and isolated, determined to drive people away. It’s also left him a little bitter. Not least of which towards the sister who abandoned him
But when a half-breed at school disappears, he finds himself drawn in despite himself, he and Kenzie, a girl who refuses to be driven off. They may be the best able to take down this new threat – but on the way Ethan learns just how much his sister has been hiding from him
When I reviewed the Iron Prince I said that I wasn’t a big fan because I just didn’t like Ash. But it’s not just Ash. I just don’t like his character Archetype. I don’t like the broody, angsty, male hero whose every other thought is about how tortured and sad he is, how much his life sucks, what a terrible person he is, what a terrible person everyone else is, etc etc etc.
I also don’t like the broody, angsty, male hero who decides that, because of some curse or powerful enemy or sheer poutiness, that he can’t possibly have any friends or loved ones because they will get hurt. The whole “I want them but I can’t have them waaaah!” has been done often and every time I’ve read it I have loathed it. It leads to endless navel gazing, endless self-pity and when coupled with point one up there, it makes me want to tear my hair out.
I also don’t like the broody, angsty, male hero who thinks he’s cursed so not only is alone, but preserves his “protective” solitude by being a complete and utter arsehole to everyone around him. It is actually possible to be a loner without lashing out at everyone like a rabid warthog; no, really, it is. And then we have the inevitable female love interest who, despite the rabid warthog behaviour, finds him interesting and intriguing and keeps coming back no matter how he tries to drive her off.
To finish all this, we have Ethan also hating his sister for leaving the family to save the Nevernever from a multi-sided war leading to inevitable genocide. Which I could have dealt with if he then didn’t feel guilty because of that.
That last one I wouldn’t have made an issue of because it’s a very human reaction; we’re not all saints and it’s perfectly reasonable for a teenaged boy to resent the sister who abandoned him when he was a child in favour of a load of fae who have since spent his life making him very very miserable. It’s a very human, very real reaction
But it’s another layer of pouting, stomping petulance on top of an already quite large heap of pouting, stomping petulance.
Read More
Source: http://www.fangsforthefantasy.com/2013/10/the-lost-prince-iron-fey-5-call-of.html