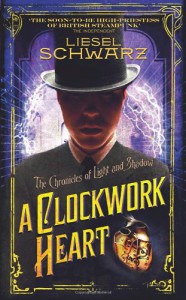 Elle and Marsh are finally married but unlike most newlyweds they don't settle into a grace period.  Elle being a young woman, still has a taste for adventure and does not want to put her piloting days behind her wheras; Marsh who has lived a long life as a warlock is read to settle into domesticity.  They being to butt heads a Elle chafes as being limited and Marsh demands more time. While Elle is away on a case, Marsh decides to take a case.  What he cannot imagine is that will cost him his heart and make him a clockwork monstrosity.  It is up to Elle to with the help of the vampire Loisa Beladodia to track Marsh down in the process deal with the threat that the White Lady places on the nation.

A Clockwork Heart started off very slowly and found myself struggle to remember what I liked about Marsh.  His behavior was absolutely patriarchal and controlling and the fact that he used love to justify it, didn't sit well with me.  It affected my feelings so much that when he was kidnapped, it was difficult to invest in the idea that he needed or deserved a rescue despite the desperate situation that he was in.

That said, I did enjoy the fact that it was Elle investing in saving Marsh, rather than the other way around.  Elle and Loisa Beladodia worked fearlessly together as a team and I very much got a Thelma and Louise vibe from their interactions. That said, the touch of spunky agent in Elle quickly moved charming to irritating.  She constantly put herself in dangerous situations without really stopping to think them through and Schwarz always seemed to allow her a way out without any great consequence. Furthermore, we are told repeatedly that Elle is an all powerful oracle and yet she does little to nothing to learn about her powers, let alone learn how to harness them.  This is an old trope in urban fantasy and each time it appears it makes little sense.


Despite how capable Elle is towards the end she still took to her bed for three months! Yes, losing someone is awful and A Clockwork Heart has a very tragic ending but I've had about enough of grown women taking to their bed.  It would have been capable to show Elle's sadness and her pain without Elle removing herself from the world so entirely.  It felt completely indulgent.