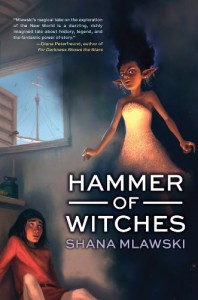 Baltasar Infante is a story teller in Spain at a time when Spain has finally united and actively seeking to purge it's borders of anyone who has not converted to Christianity. Being a Jew puts him and his family in a precarious position but when his father, the legendary Moor sorcerer pays him a visit one night, it brings Baltasar and his aunt and uncle to the attention of the Malleus Maleficarum. Baltasar is forced to flee the only home he has ever known and when he gets a prophecy from the Baba Yaga that a great force is traveling west to end the world as we know it, Baltasar knows what he must do - kill the great Amir al-Katib.As much as this story is about folklore, magic and religious persecution, it's also very much about colonialisation. Much of this story takes place on Columbus's famous voyage west in 1492. When the Baba Yaga speaks of a force moving west to destroy the world, what she is talking about is how colonialisation will destroy indigenous cultures and wipe language and history completely off the map. Even if a single battle had never been waged, the diseases the Europeans brought with them alone would have been enough to start the genocide which did eventually occur. Being Spanish, Baltasar could not conceive of the fact that it was the Spanish who were the threat. This is framed as is part of his optimistic nature rather than his Eurocentric view of the world. Mlawski drew on a lot of folklore to write this book and it is evident. There were golems, unicorns, and many other fantastical creatures from a host of mythologies. It helped to make the world Mlawski created not only diverse but absolutely engaging. To use his magic, Balthasar had to rely on his ability to synthesize folklore and take elements from it. The magic was also different according to race and gender. The Ayiti having a different belief system than Balthasar showed that even though their culture was different and perhaps not at technologically advanced that they were powerful in their own right. Then there is Catilina who uses the Joan D'arc spell to present as male because there are thousands of stories in which women must become men or appear to be men to gain a modicum of respect.Though Balthasar is the protagonist of this story, there are two very strong women - one being Catalina a fellow sorcerer and the other Jinniyah a half human half genie being. Catalina boards the Nina to escape a marriage to man that she does not know in order to make her own way in life. She is highly capable and challenges the sexism in the fairytale sleeping beauty. What Balthasar sees as a nice romantic tale with a happy ending, Catalina sees one revolving trap for the princess in question. Catalina constantly sets limits on Balthasar and keeps her best interest in mind at all times. She even acts when the sailors decide to kidnapp and rape some indigenous women. Catalina knows how hard it is for women in this world to escape being abused and to lead independent lives and she uses magic to change that as much as possible. Though her magic is based in the same concepts as Balthasar's, her experience and her gender allow her to interpret the stories differently and create different creatures. Jinniyah is similarly an outcast but not because of gender but because she is half ifrit and half human. She doesn't really belong anywhere but she is smart and extremely knowledgeable. In some ways, it would be fair to say that she acts as a sort of conscience to Balthasar. She is desperate for Balthasar to reunite with his father Amir al-Katib and it's this desperation that leads to a reunion with the destruction/death of either father or son. In some ways, Jinniyah is very innocent.Read More
Tweet