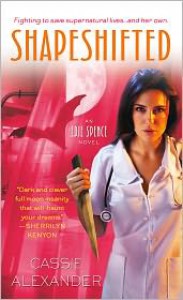 Edie is depressed. Since being shunned by the vampires and losing her job on Y4 she has settled into a much more routine, much safer existence as a nurse in a sleep clinicIt’s also dreadfully deadfully boring. She’s lonely, she’s lost purpose and she’s lost the advantages the Shadows could have given herWhich would be especially useful when her mother reveals she has terminal cancer. Only a miracle or magic could save her. Or vampire bloodWhich means Edie needs a new way into the supernatural community that is shunning her. Chasing what desperate leads she can takes her to a charitable clinic in a poor area of town, searching for Santa Muerte. Working again as a nurse, she quickly finds herself in a much more energetic and dangerous environment – there may not be werewolves and vampires coming through the door – but there are gunshot wounds and gang members.And something far more involved – magic and vampires hidden carefully from her, unless she can get someone to trust her with their secrets and maybe give her the key to healing her mother.It’s awesome, go read it.Why are you still here? Go read it! Go go go!You haven’t read the previous books? Then go, read them, then read this.Ok, fine, I suppose I’ll do a review beyond “awesome.”Firstly, this is a story where I didn’t know where it was going until it went there. At no point did I anticipate what was going to happen, at no point did I guess the ending, at no point did I guess what Edie was going to do or what was going to happen to her. This story was original from the very beginning, lacking in clichés and left me guessing all the way through. I can’t stress how rare that is, how many books I can at least feel the shape of its going to end – but not this book, this book was a complete discovery right until the very last page.I didn’t only not know what was going to happen, but I was completely surprised on several occasions. I can’t even refer to them without providing spoilers which would be a crime against humanity for which I would be (rightfully) shot. But I was very very surprised indeed.It’s this uniqueness and surprise that makes it hard for me to talk about the plot because its originality is something precious not to be spoiled. But in terms of pacing, style, descriptiveness and general writing skill, this book hits the spot. It’s descriptive enough to get a full, powerful sense of the setting, without being overdone and dragging. We have the twists and the mystery and Edie’s lost, confused frustration of it all, without it being slow or slumped while at the same time not rushing through these scenes or skipping over any side issues. It’s an extremely well written book that you can easily read in one setting with brief pauses to growl angrily at people interrupting you; I suggest stocking up on aerodynamic objects for easy throwing.Read More
Tweet