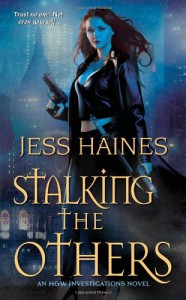 Shiarra has a mission – to find the werewolf who infected her and kill him. And maybe her cheating ex-boyfriend Chaz, leader of the Sunstrikers as well. And who knows how many other Sunstrikers if she has the chanceShe also has a time limit. One month. One month before she turns. One month before she becomes a werewolf. One month before she cannot use her belt – her magical hunter belt containing the spirit of Isaac, a skilled and dangerous anti-vampire hunter – to give her the edge she so desperately needs.With the police hunting her and having fled Royce’s protection in favour of more direct hunting, Shiarra decides to align herself with the White Hats once again; the fanatical anti-Other hunters will probably kill her if she changes. But until then she can work with them to hunt down Chaz – who has gone to ground leaving almost no trace or trail.Shiarra, all alone – having fled Royce and fighting against her boyfriend and the entire Sunstriker pack – where oh where can Shiarra turn?Why to her friendly neighbourhood hate group of course!No! I’ve said it before and I will say it again – if the White Hats are some vicious, violent hate group that seeks to kill all the Others regardless of whether they deserve it or not then they are not the people who should be on your rolodex under “people to ask for favours.” She has done this time and again, all the time emphasising their utter hatred of all things Other and how much they hate her contacts with them. It’s ridiculous when you consider how a few mean words about her link with a vampire from a werewolf were sufficient to send Shiarra into tears in the last book, but violent murdering hate groups? Yup, she’s fine with this. Why would they be more welcoming after she ran out on them the last time?Add in to this is that Shiarra thinks she is turning into a werewolf. Last book she was making all kinds of preparations for this – but now she goes to the White Hats who discuss whether to kill her now and get it over with? She even lurches into an off-again-on-again possible wish for suicide to try and justify it – but it’s never maintained. She mentions that the White Hats will be able to do what has to be done when the time comes – a clear indication she expects them to kill her, but at no point does she express that being dead would be better than being a werewolf and it goes against how she acted in the last book seeking help and guidance with how to be a werewolf.This gets more annoying when she has to kill an Other and gets ten kinds of angst out of it. That wasn’t part of the plan! Noooo! Well, you’re working with a hate group that wants to slaughter all of the Others and you are surprised that this comes with death? I’d support her angst and grief over killing someone if it weren’t for her being utterly incapable to follow the very obvious consequences to her decisions.There’s also Shiarra’s ongoing loathing of all things Royce when, of all the people she has to deal with, Royce is the most reasonable, caring, accepting and helpful of anyone she has dealt with – and has proven this many times. Her blaming of Royce for even the most convoluted things became an almost running joke – I expected her to start cursing Royce every time she stubbed a toe or someone drank the last of the milk. Shiarra must go through life constantly shaking her fist at the sky screaming “daaaamn you Royce!!!”Read More
Tweet