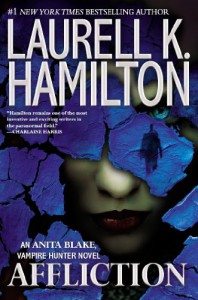 Anita finally gets to meet Micah’s family – but it is in the worst possible circumstances; Micah’s father is dying. Long estranged, Micah only has a short time to return to his family, reconcile after he deliberately shunned them and say goodbye to his dad.Anita is there for moral support – but there’s more. Micah’s dad is dying from a supernatural disease apparently from a bite from a zombie. And he’s not the only one. Working with the local police, she finds huge numbers of missing people – and more and more zombie attacksMore than a personal tragedy, Anita has to find and defeat a vampire who can do things she never imagined possible – and who wants to see the whole world die.This book was a lot better than I expected.Before you take that as a massive positive, do remember that after reading the last 10 books or so in this series, my expectations are very very very low indeed. It’s kind of like going to a doctor panicking because you have the Ebola virus and being reassured that no, your ulcer just exploded.The main thing rescuing this book is it is not porn. Yes, there is sex in it, no the sex doesn’t serve any real purpose other than the need for sex, but it doesn’t overwhelm everything like previous books. This was a massive relief. So what takes its place… plot?HA! C’mon this is an Anita Blake novel, the plot has to fight for every second of appearance!The first filler is recapping. Lots and lots of recapping. This is book 22 of the series. There is a lot to recap. So much so that I’d advise not even trying. No, not advise, I’d BEG you not to try. Then there’s the pointless descriptions – why random cop extra #4 needs 2 paragraphs of description I’ll never know. They all do – and it’s more than just simple basics, she goes into elaborate lines about how this man has big hands for his body which would make him look clumsy but he’s not and she bets she’s not the first person to think so and… WHO CARES?! Why is this remotely relevant information?! GET ON WITH THE PLOT ALREADY!Next distraction (what, plot? No not yet, you should be so lucky!) Haters. Haters, haters, haters. Whenever there is a group of at least 3 people, one of them will hate Anita. Either because she’s shagging vampires and werebeasties, the sluthussyjezebel. Or because she’s sleeping with lots of men, the sluthussyjezebel. Or simply because she’s female, the sluthussyjezebel.Which could be good – some scene where Anita faces prejudice and works round it, fights it, calls it out, etc. But it’s every group. All the damn time and it’s never even remotely subtle. People feel quite happy to scream obscenities at her in front of their superiors, in front of witnesses, in front of other women, in front of an endless stream of people who would, at very least, lead to you spending some quality time in diversity seminars. And it’s not just one or two, whenever there are a group of people they WILL have heard of her and at least one of them WILL freak out and have a hatefest in blatant terms then Anita will whip out her WISE 101 text books for a very long and very dull explaining of the bleeding obvious. At this point Anita Blake must be more famous than an A-list actor because she can drop in on law enforcement in Colorado (Anita is based in Missouri) and have everyone not only know her, but know all about her personal life as well – enough to hate her for it or be in awe of her for it.Ok, now can we get to the plot?Alas no – because now we have to deal with pages and pages and pages of emotional navel gazing and angst. I would actually be fine if this revolved around Micah and his actually dying father, but no – Anita’s dead mother returned to wave her issues, as did Nathaniel’s past; we had a run round Nicky’s (oh why is this character even here?!) sadness before we visited the woe that is afflicting the Harlequin’s animals to call then we spend some time dissecting which of her men she wants to marry and which not and whose fee-fees will be hurt with a final stop at “oh what shall we do with Asher” station which we have visited so many many times before.Ok plot?No, because I have another rant! Why does interesting stuff in this series happen in the downtime?! Jean Claude is now head of the American Council, Master Vampires across the US are blood oathing to him and we spend pages upon pages upon pages explaining political ramifications of this. Even on the phone when Anita is telling Jean-Claude that Micah’s dad is dying we have several pages explaining this.EXPLAINING THIS?! This is like when you killed the Mother of All Darkness in the freaking downtime! This is the most exciting, fascinating twist to happen in the Anitaverse and it happens between books?! We go from “we should totally do this” to “yeah it’s done” and don’t get to see it?! Are you kidding me? You don’t even meet with the local master of the city to see how that works in practice?! And why did you form a Council? Originally that was to protect the US vampires against a Mother of all Darkness possessed European Council, but with her dead, why did you do it? Was it just a good idea? Was it for funsies? Power? Or are we expected to believe the unaffiliated rogues are a threat? Because you didn’t show them as oneRead More
Tweet