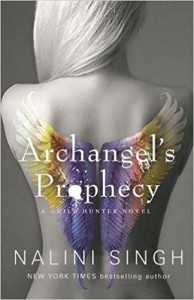 The Cascade is rising again, the power swelling and ancient angels starting to influence the world with their ancient prophecies

Prophecies which focus a lot on Elena, the only human born angel in existence. She’s gone through many changes - but will she survive how the magic changes her again?

But while the world is shaken there’s a more mundane, but deeply personal threat as well. Someone is killing vampires - including an attempt on her brother in law. She and the world may be under threat from magic - but her family is under threat from a killer and Elena refuses to let that go

I find myself clinging more and more desperately to Nalini Singh’s epic worlds because we’re seeing so few of these beautiful epic series. More and more are closing and, damn it, I love me a long epic! More epics! More book series with more books than I have digits!

And so we continue to the story of Elena - and I like that we are going back to Elena this book after several books of following more and more of Raphael’s Seven and their relationships, we’re now returning to the original, Elena, the first human born angel and what she means in this changing Cascade world. I like this revisit because we can see so much of how Elena has grown now we’re refocusing on her - another advantage of these long series. Some of this is very personal to Elena which really shows both a lot of her personal growth and journey as well as how she is so very different from other angels. Her relationship with her family, her attitudes towards her brother-in-law, her sister and, above all her father. She has evolved and has some much more mature and nuanced emotions towards her family as she and they have grown. Equally it emphasises she isn’t an Angel - how so many of those angels have no real familial ties of note. But we don’t just see her humanity but also how angelkind has changed her. She looks at angels she thought as cruel and sadistic and now she sees them from a much different perspective - she can see the risks they take with vampires as well as the angel’s cruel response. She’s not as condemnatory even while, at the same time, not quite signing off on it

Throughout the book we see Elena elegantly straddling that line between human and angel - and even her ties with the Guildhunters still putting her both part of the organisation but also apart. I also really like how this is never seen as a bad thing - sure she has lost some commonality over the books with some of her friends, but she still has her ties and in a genre where difference is so often seen as exclusionary or isolating, Elena has a really strong friend network. Which I also appreciate in paranormal romance where so many women seem to live lives with few truly close connections beyond that with their love interest. In fact, huge amounts of this book happen with Elena completely separate from Raphael - I would even say he is a bit character in this book, there more for what he represents than his actual presence. I’m not saying Raphael should be sidelined - but it’s nice to see us revisiting characters in a romance and her having a life that isn’t entirely focused on him

I also love where Elena is, her relationship with the Legion, her home, her habits, her family - she has a full life.

The artfulness of this was that by setting up Elena, who she is and how she’s changed it then really raises the stakes over actually losing it - whether that’s the Cascade changing Raphael to make him more powerful - and less human - or the much more immediate and heartbreaking threat of the changes wrought in Elena taking her angelhood from her. This would be a great plot point in any book but that poignant set up makes it all the more powerful because we can see exactly what Elena stands to lose

We don’t really expand the world building or the metaplot unduly this book - beyond Cascade shenanigans continue - but we get to see more breadth and depth of the world, little details like what happens when vampires leave their contract, their underworld, a lot of more mundane life on the ground of the city.