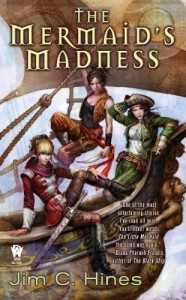 There is a new threat to the kingdom – the seas around the nation are becoming impassable due to rampaging mermaids and, worse, Queen Bea herself has been injured and lays dying. It falls to Princess Danielle, Snow and Talia to set out again, the only ones who can to try and save Bea’s life – and her very soul – and preserve not just the kingdom but all seafaring nationsBut it’s a complex task and finding who the actual villain is proves more complex than previously imagined. It begs the question – even if the villain is the victim, can they afford to be merciful?And all because the Little Mermaid didn’t get her Happily Ever AfterI do like how this series challenges a lot of assumptions about fairytales, a lot of the staples we’ve all grown up on that are, frankly, dubious to say the least. In this book we have a very strong challenge to the whole love-at-first sight trope that so dominates fairytales. Why should that prince you’ve barely met and hardly know turn out to be a nice guy? How can you be so sure of his affections after such a short time knowing him? Or that, occasionally, that guy you fall for turns out to be a brutal, manipulative, arsehole?So when the Little Mermaid decides to give up her family, her people, everything for the sake of the love of a human she has known for a week – is it any surprise that it ends badly or one applies reality rather than fairytale rules? This story is a tragedy through and through because Lirea is, in many ways, a victim as much as she is a perpetrator. Ultimately, she was a very young woman who fell hard for the wrong man and was badly used by people who were older and wiser than her who sought to exploit her for their own ends. I like how this is even applied to Danielle’s own story – Talia pointing out just how lucky she was that Armand was a good man since they married after knowing each other for so little time. Danielle is presented as having made a very naïve, very silly decision that, luckily, worked out; this is even more stark when you consider that out of Snow White, Sleeping Beauty and The Little Mermaid, Cinderella is the only one who managed her Happily Ever After.This book does a very good job of preserving that nuance, partly through the lens of Danielle’s near infinite compassion and the pleas of Lirea’s family, but also through the much harsher and more cynical gazes of Snow and Talia who recognise the real bad guy. At the same time, this doesn’t require anyone to be a saint or ruin the story with people being just so damn nice that you have to wipe the sugar off your tablet screen. While there’s sympathy for Lirea, there’s equally not much forgetting that she has killed people, she is threatening the nation and she has hurt Queen Bea. Compassion and acknowledgement of her victimhood does not translate into automatic forgiveness – certainly not from Talia, nor does it stop the 3 princesses from doing what they consider necessary to save Queen Bea. And if that means everyone doesn’t get a happy ending – well, so be it; not everyone’s promised one.Even the behind-it-all villain is presented with a level of nuance. Ultimately her actions stem from the widely held belief that mermaids are lesser people; a belief they took to heart and sought a way to save themselves and their people from. No-one is just a villain, and even bad people have people who care about them.Read More
Tweet