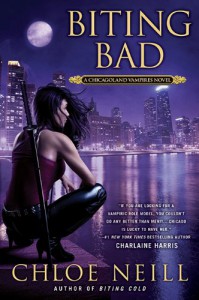 More drama returns to Chicago – this time in the shape of riots. Riots with firebombs targets that are close to the vampires – including their blood supply and Grey House. Naturally this threat has to be investigated and countered – as much as they can counter the growing anti-vampire attitude.But the rioters don’t behave as would be expected – there’s definitely something behind them and perhaps one of their many enemies is pulling strings and hiding a more nefarious agendaAnd the GP is suffering from its own conflict – Darius has had a blow to his authority and his chief rival has his gaze fixed on Cadogan House.Whenever you have any kind of “whodunnit” or “whydunnit” mystery, you have a problem. There’s a problem between keeping the story going but at the same time not tipping your hand early. It’s simply hard to keep the pacing going while maintaining the mystery – it’s very easy for a book to become boring while everyone sits around frustrated, with no leads. At the same time, too many side plots can derail the plot and make the mystery seem almost background.Biting Bad does a good job of maintaining that pacing. We have side plots – related to Grey House and the ill vampire which nicely tie into the overall mystery. And there are other side-plots –Mallory, Merit’s parents, the GP – that fit the idea that your whole world doesn’t stop to allow you to focus on one issue. That said, I think both the parents and the GP were rather unnecessary in this book and added nothing to the overall plot and, as explained below, didn’t make a whole lot of sense.I can see some excellent hooks in this book – I see Mallory joining the house, perhaps Catcher as well and House Cadogan in general building a supernatural coalition its own way. I can see shades of them setting up their own organisation, especially considering the actions of House Grey and the GP. I like these hints of future action that don’t have to be spelled out, merely implied and suggested for future plot hooks. That said, I found the ending frustrating in that the consequences of it were not shown.In terms of Merit I think we have some improvements on some levels – her considerations about her relationships with both Ethan and Mallory (and even with other vampires within the House, like Helen) point towards some very belated character growth. Even her interactions with her family suggest we’re edging up to something resembling growth which is long overdue. She has some good ideas – both in the investigation and also with using the press to try and counter their negative image. The ideas are good but not genius – but at the same time no-one hailed her as the world’s most awesome tactical genius for her basic ideas as has happened in previous books. She has competent ideas, she was expected to provide competent ideas and her competent ideas were praised for their competence. It was nice to see.The flip side is that Merit’s previous strength – her combat skills – were sorely lacking this book. Now, far be it from me to hold up skill with weapons as proof of a strong female character, but one of the main reasons Merit is Sentinel at all is because she is physically dangerous. It’s why she can spar competently with a man several centuries her senior. This is the reason for her rank – beyond her competent ideas and beyond the fact Ethan has the hots for her; she is sentinel because she is physically capable and because she doesn’t bow to Ethan. We saw neither of these things in this book. I can understand her losing to the GP – given his age and power – but being taken down by a human wielding a kitchen knife? Merit is better than that. I could take one comic disaster to have everyone laughing – but where was the counter moment? Where was the moment where Merit kicked arse and showed her strength?But the main problem I have with this book is how some of the characters are developed and how that fits into the world – I either have trouble accepting them as they are or believing their actions. Some of these decisions could be explained if you extrapolate a whole lot of back story – but that’s not shown in the book and I’m engaging in mental gymnastics to justify the characters.Read More
Tweet