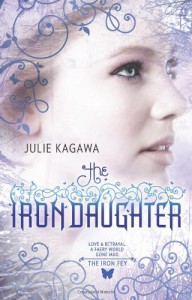 Meghan begins her stay in the Winter Court, hostage to the Unseelie Queen, Mab, and seemingly friendless, especially as Prince Ash turns cold towards her in the unforgiving environment of Tir Na Nog.But The Iron Fey have not stopped their plotting just because their king is dead. A new monarch has arisen and he has sent his agents to steal the Sceptre of the Seasons, the powerful artefact passed between the courts to signify their changing power – and the changing seasons. Mab instantly accuses the Summer court and the two great courts of faerie march to war – leaving them vulnerable to the Iron fae’s attackOnly Ash and Meghan know who truly took the sceptre – and no-one believes them. It’s down to them to find the sceptre and save the fae. And the world – because while the sceptre is out of the court’s hands, the weather will rage out of control.I said in the review of the last book that, while I found the romance and budding love triangle annoying and fast tracked, they were properly second to the main plot and while they were a little irritating, they were ignorable.Which is why, when this book started there was a moment when I nearly put the book down and refused to pick it up again.They’re heading to Tir Na Nog and Ash reminds Meghan that any display of fluffy emotion will mean that Mab & co will see it as weakness and promptly exploit it to the doom of them both. We even get a vast copy and paste from The Winter Passage to drive the point home. So when we get Meghan in the same room as Mab and Ash?Meghan: *soulful puppy eyes at Ash*Ash: uh… hide emotions… rememberMeghan: love me Ash! Love me! ZOMG WHY ARE YOU NOT LOVING ME!?Ash:… y’know, Mab is RIGHT THERE watching usEvil prince: Hey human-princess I loathe and despise – want to eat this totally innocent apple?Meghan: Fairy food in fairy land offered by an obvious enemy? WHY THAT SOUNDS DELICIOUS! Clearly there can be no catch to thisAsh: Meghan…Meghan: And IIIIIIIIIIIIIIIIIIIIIIIIIIIIIIIIIIIIIIIIIIIIIIIIIIIIII WILL ALWAYS LOOOOOOOOOOOOOVE YOU!!!!!!!!!Ash: *sigh* Of course we do not love each other, that is only banned by all our laws and would get us both banished or executed *hint hint* so no, I don’t love you. *icey angry eyes*Meghan: ICY EYES! Zomg he hates and despises me! It was all a lie! He clearly isn’t acting and he must totally mean he hates me! Oh woe is me! WOOOOOE! WOE!!!!!!Later:Ash: Come Meghan we must go!Meghan: NO! You hate and despise me!Ash: uh – secret remember? Showing emotion is weakness? We did explain all this – did you hit your head or something?Meghan: NOOOO! Clearly you only pretended to be in love with me and it was all a trick to get me to Tir Na Nog!Ash: Yes, that makes sense. You had no power, no magic and can’t fight – I could have dragged you to Tir Na Nog by your hair if I wanted to. Why would I even bother to trick you?Meghan: You did it all to mess with my head and break my heart like you do to mortal girls!Ash: Yes, I went to a land that poisoned me with its very air, burned me with acid rain and nearly killed me so I could screw with some girl’s head. That makes perfect sense.Sadly, while Meghan’s lines are a heavily paraphrased version of her position, Ash did not respond with that snark, but he really should have. From here we move to Robin telling Meghan he loves her – this would be the same Robin who has watched her since she was a baby to her current age of 16 but for some reason absolutely no-one thinks that’s severely creepy. And Ash catches them in a semi-compromising position and huffs off to more angst and drama.Which leaves me wondering what happened? Did someone slap a CW label on the book or something?Thankfully, after Ash slopes off, the romance stops clogging the gears and we return to the same kind of story that made The Iron King such a good book. We have an excellent story with lots of action which is really well written and exciting. We have the rich world that draws heavily from a lot of research of different fae myths (and non-fae myths at that) brought together really smoothly that really draws me in. While at the same time there’s that excellent balance of description – just enough to give everything its full worth, but not so much that we feel like we’re being pulled on a guided tour of faerie land. Throughout the story rarely loses its sense of epic – of grand forces in balance and dire consequences awaiting failure – and I’ve got a soft spot for epic.Read More
Tweet