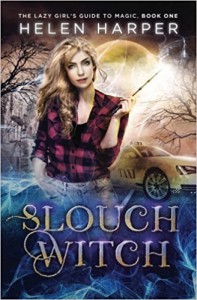 Ivy isn’t a heroine. Ivy isn’t a solver of problems, she doesn’t fix things and if you’re in trouble she’s the last witch to call. She’s much happier driving her taxi and developing a deep and abiding relationship with her sofa.
Sadly when someone screws up the paperwork she finds herself drafted by the Magical Order’s Arcane branch and magically linked to way-too-energetic, way-too-serious over achiever Adeptus Exemptus Raphael Winter
They do not have compatible personalities.

This is a book that just makes me smile - no grin - through every page. Mainly because of Ivy, the protagonist, a witch and a woman after my own heart.
She’s lazy.
Y’know in a genre that occasionally flirts with portraying an “every-man/woman” a person all of us can identify with, we’re constantly shown somone who steps up and acts the hero, pulls out miraculous feels while being heroicly brave and amazingly virutous and impossible impressive.
And I’m sure we’d all love to say we identify with that person. But it’s a lie. It’s a dirty rotten lie. Here we have Ivy. The woman who needs to be dragged out of bed in a morning. The woman who would rather cut her own leg off than exercise. The woman who invented a rune to make things lighter because she was too lazy to carry heavy things. The witch who made a run to open her front door because she couldn’t be bothered to dig her keys out of her disorganised hand bag. A woman whose idea of a good time is spending some quality time with her sofa and television. A woman who uses the lift when she really should use the stairs.
There’s something so very real about her.
She’s also extremely snarky and I know we have a whole lot of snarky protagonists out there. But it really works with this character because she is so reluctantly involved in the plot line and that plot line itself, at least for most of the duration of the plot, isn’t that high stakes. Her history with the Order is painful and it hasn’t treated her well. She’s also only ever seen it at its worse - and then she’s magically, accidentally, drafted to help Winter (designated love interest and boring guy to be snarked at) which absolutely no-one wants but no-one can get out of. Naturally she’s not going to be favourably inclined to help anyone. And it’s not really massively selfish for her to be a colossal pain in the arse - and seeing her stomp through this stuffy, rigid hierarchy not giving a damn about any of it was glorious. She doesn’t owe these people anything. She doesn’t respect them. She doesn’t like them. She isn’t invested in her mission. So damn right she’s going to be awkward and snarky and disrespectful.
She’s dragged into this against her will and it works. If I have one complaint about the plot in this book it’s how quickly Ivy capitulates to the Order - honestly I would have been 10 times more awkward).

Despite all this Ivy is clearly super competent, very intelligent even when made easily bored (partly because she is so intelligent and talented) without being super woman. I really like her.
And I like that we do get a nuanced look at the Order as well - it’s not just a stereotypical evil/incompetent organisation. I love Ivy and Winter’s disagreement over the role of ambition and whether it’s a positive force or not and the awesome skewering of officer politics and how it can destroy an organisation. And when we found the antagonists? An excellent moment.
Read More
Source: http://www.fangsforthefantasy.com/2017/07/slouch-witch-lazy-girls-guide-to-magic.html