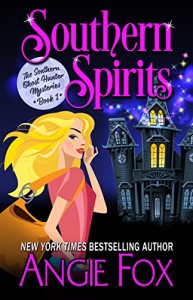 Things aren't going well for Verity Long.  The entire town is gossiping about her for standing up her fiance at the alter and now she has to find a way to pay for the wedding thanks to the mother of her gilted ex fiance. Verity has been forced to sell virtually everything she owns and the bank is foreclosing on her house. Verity is hopeful that somehow she will find a way to save her home but she never could have imagined that the answer would lie with a long dead mobster she just accidentally trapped in her garden.
Clearly Southern Spirits is paranormal chick lit, so don't even pick this up if that's not your thing.  It's exactly as advertised which for me, is the perfect way to spend a hot spring afternoon with a cold beer. It won't change your life, or reveal the mysteries of the universe but it's easy to relax with and a fun little journey.
The only way for Verity to earn enough money to save her home is to figure who is haunting Ellis's restaurant with help of her mobster friend ghost Frankie. Given that it's Ellis's brother that she walked away from and people are already talking, being seen around town with him is decidedly not a good idea in terms of redeeming her reputation. I helps a lot that despite his wealth, Ellis is the family's black sheep. I know that cops see a lot of weird things in their life, but it really is a leap for Ellis to decide that Verity is the one to deal with his ghost problems just based on her knowing where his dead uncle's lighter is. Fortunately, because this book is chit lit, I say just run with it.
One of things that I really liked about this book was the discussion of class running through. Being in debt and without a job meant that Verity struggled to survive.  Her home had no electricity and she was forced to use a camp stove to heat up her ramen noodles.  Ramen basically became the staple of her diet and she was only able to eat other things when the people in her life treated her. Verity's conversation was regularly peppered with details of what could be found at the dollar store. Even having a fluffy towel after a bath was a luxury because she had no drier for her clothing.  Even with how far Verity had fallen, she realised that she was lucky enough not to have to squat in an abandoned home and that while she was surviving things could actually be worse.
Then we had Harry, who was actually homeless before Ellis managed to get him into social housing.  Harry isn't a very social person and seems to have a problem with alcohol at the very least. Based in the aforementioned, Verity was quite ready to assume that he was responsible to the damage of Ellis's property and even the murder of Ellis's uncle.  Ellis however never wavered in his conviction that Harry was innocent based on his gut instinct, even though the facts all reasonably pointed to Harry.  This of course is yet another case of suspending reality.  Ellis's faith in Harry served to cement the goodness of his character, even though in reality, someone like Harry is exactly who cops would suspect.  Cops have a way of going after the underclass and failing to see their humanity.  Their mandate may be to protect serve but that only applies to the 1% and their corporate masters.
Fox makes a big deal about Verity being a modern day southern belle. Verity is very committed to her southern manners and even southern history. She quickly recognises the uniform of a roughrider and gushes about him potentially meeting Roosevelt.  I suppose I should be thankful it wasn't a confederate soldier, given how far too many southerns love to think of the Civil War, as the war of Northern Aggression.
Read More
Source: http://www.fangsforthefantasy.com/2017/06/southern-spirits-southern-ghost-hunter.html