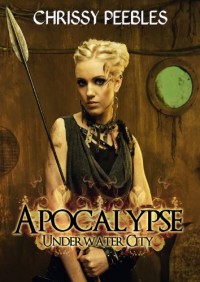 The world as we know it is gone.  Who would have thought that humanity would suffer the same fate as the dinosaurs? When a huge asteroid hits the earth, only a small group of people saw it coming. Armed with the knowledge that the surface of the earth would no longer be habitable, they built a dome under the ocean as a sort of ark in the hopes of saving as many as they possibly could.  They watched in horror as the asteroid made it's way towards the earth and people studiously ignored or denied the implications.
It's been years since the asteroid hit the earth and sixteen year old Sky Hammons is desperate to join the small group of humans who are attempting to repopulate the land.  Even though the small dome proved to literally be a life saver, Sky is desperate to leave and sees herself as little better than a rat trapped in a cage. Unfortunately, it seems that the leader of  humanity may not necessarily believe that everyone should have the right to feel the suns rays on their skin.
I'm truly thankful that Apocalypse is only a novella because I don't think that I could handle a full length book. This short entree was absolutely riddled with grammatical mistakes causing me to re-read portions of it continually trying to divine the meaning of the text. I'm not one to complain about mistakes in a self pub if I can understand the authors meaning but when it becomes a reoccurring problem and detracts from my enjoyment of the story, it's absolutely worth mentioning.
We are told repeatedly that people who complain about the ruler simply disappear without explanation and so what does Sky do? Well, she's constantly running her mouth about how something just doesn't feel right and questioning if they've been lied to about the condition of the surface.  If people are suddenly disappearing because they are too vocal, the intelligent response is not to boisterously complain but maybe to investigate quietly and perhaps question even more quietly. Furthermore, if people are disappearing for being vocal or resisting authority, why is Sky still strolling around growing pansies and sparring with her bff?  The disappearances of people speaks to authoritarianism but beyond Sky's continually blather about something not feeling right, we were not given any evidence to back up her suspicions.  If her government is so evil why are they allowing the people to train with weapons, thus gaining the skills to revolt if necessary?
Then we have the murder of two young women who we are told are innocent by Skye but the government doesn't seem interested in investigating. Here's a question, why should a sixteen year old, known to have a big mouth be privy to the inner workings of any investigation? In fact, what investigator runs around telling the populace what they've learned before establishing who the guilty party is? If that were not enough, Skye takes objection to the removal of the body. Should the authorities have just left the body to rot in a small enclosed public space?
The synopsis says that Apocalypse: Underwater City is dark and upon reaching the end, I don't think it could have been described in a more inaccurate fashion. At best, Apocalypse: Underwater City is twee.  It's only three years old but the pop culture references already feel so damn antiquated.  Look, I'm a nineties girl and totally love the Smashing Pumpkins, but never has the lyric "Despite all my rage I am still just a rat in a cage", been so misused. We get it, Sky feels trapped but we don't understand is why exactly, despite repeatedly being told by Skye that this is how she feels.
Read More
Source: http://www.fangsforthefantasy.com/2017/04/apocalypse-underwater-city-hope-saga-1.html