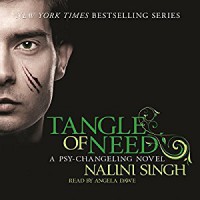 Adria and Riaz are both very dominant wolves who have newly returned to the Snow Dancer lands after some time away. Time in which both have been badly burned by their romantic lives

While Sienna is finding her relationship with the wolf Alpha Hawke much smoother than anticipated – but preparing to be Alpha’s mate is much more complicated with some heavy responsibilities.

The Psy war rages unabated, flaring into open civil war – and the desperate Pure Psy are restoring to unthinkable tactics that the Snow Dancers cannot ignore and cannot be neutral in the face of.

I do like how we’re calling back to a lot of the previous characters and partners in this book. One of the main issues I have with these kind of Paranormal Romance series with different characters each book is that the previous characters seem to drift away. We get nice cameo appearances of Sasha, but for several books we seem to have completely forgotten that Faith, the uber-powerful F-Psy is out of there. The Leopards in general have been very sidelined in the last few books which is such a shame because they were the first characters that have been kind of lost

This book ended up feeling far more of an ensemble book – drawing on the Council, with Hawke and Sienna very much being present and powerfully involved. We have predictions from Faith, we have Sasha and Ashaya, we have Judd all taking part. Not in a huge way, in all cases – though I wold say Hawke and Sienna are virtually co-protagonists with Riaz and Adria – but definitely taking up a powerful part of this book. We also have a really fascinating side plot coming with the Arrows and Kaleb

And I really like this side plot, because they’re both deeply immersed in the consequences of the Psy Civil War (which, to the Changelings, is still somewhat peripheral to their lives. But I still respect the conundrum they’re faced, their duty to step up because others are relying on them and whether they could possible be still in the face of such utter atrocities) but also because they represent that missing question over Silence that is not really analysed in the Changeling packs: the idea that Silence is necessary for some Psy. The conditioning that makes them safe, how the Arrows have relief on it or even how, if it starts breaking, the Arrows can begin to feel the brutal lives they’ve lived and consider whether they want to live at all.

In general there’s a widening of the plot in this book beyond the central romance which allows us to explore much wider and deeper. Like there’s Sienna realising she needs to step up as the Alpha’s mate means she is studying more about the pack so she can step up to discuss matters with Hawke. I love that she is considered to be integral to the Pack leadership structure and that having the deathly power is not enough to do that: her explorations allow us to explore as well just as Kaleb and the Arrows let us see more of the Psynet.

(Though I do want to know more about the “Maternal Females” which seems to be set up as a third class from both Dominants and Submissives. Which sounds nicely interesting and complex but the fact it’s gender specific makes me think it’s created for the sake of having “powerful women” but not having them as warriors. Which is fine and even right – but why is it women only who need the less-aggressive dominant role?)

Adria and Riaz both bring different elements as well: Adria with her take on dominance and Riaz being a lone wolf and the way that relates to the world wide influence of the Snow Dancers (again another element of this series we haven’t really developed)

Their romance is also interestingly different. For a start they’re both dominant and Adria makes it clear over and over and over to Riaz that she isn’t going to be meekly submit to his authority. I also really like that this relationship takes on the whole concept of the Mating Bond: And how it can be resisted and isn’t the final word in the romance. I like this because I hate mating bonds. I hate the removal of romance, of developing affections or actually choosing a relationship which mating bonds impose. By having this we not only develop this relationship but by simply framing this relationship as a rejection of the mating bond raises the possibility for the previous relationships. It adds an element of consent that is otherwise missing from the previous depictions.