Dragonspawn (World of the Lupi #13) by Eileen Wilks 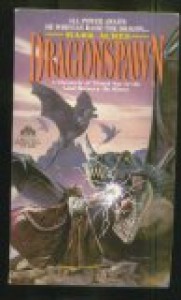 Sam, the great Black Dragon, is finally willing to release some secrets about the Sorcerer Tom Weng and the dragon’s shameful secret

When the missiles start landing

The nature of the dragonspawn become a less pressing problem as Sam is attacked, nuclear weapons start flying and Lupi children start disappearing

The war with the Enemy is finally coming.

There’s a lot I love here

I love that we’re back to that core battle – the battle against the enemy. We’re focused again on Lily and Rule. We’re involving the dragons and Lily’s friends and Cullen et al. It’s back to the main meta and the main plot

We continue to have the excellent world building – the wonderful development of things like the dragon’s culture and knowledge and world and unique biology. I love the excellent, detailed insight we got into even relatively minor players like the Gnomes – creating an impressive, involved culture and tradition and language system for being that have so little role but still get a full accounting and development.

All of it through the lens of Lilly who continues to be awesome and intelligent and insightful and so wonderfully competent.

We also have a lot of racial diversity. Lily is an Asian woman, the awesome Madame Yu is back in the picture. We have Black, Native American (including Benedict, a prominent character) and Latino characters in the police force, in the lupi packs, in every group that plays a role in the series. Racial diversity has always been more of a norm in this series than an exception – wherever we have a depiction of a large group of people there will be a racial cross section among them. And Lily with Gan, Cynna and her grandmother does not move in an all male setting or surrounding.

In terms of LGBTQ people… well if you know from previous books then we have some because we know Madame Yu is in a same-sex relationship – but it isn’t mentioned at all in this book, there are no other LGBTQ characters and some homophobia and transphobia included: including by Cullen ironically (or not) in a scene where he is calling out racism and anti-religious hatred. Well done for fighting bigotry – but by encouraging and supporting other bigotry? Yeah, thanks for that