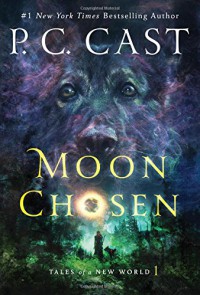 I don’t know how I got roped into this, but it appears I’m reading more P.C. Cast. I blame Cynna, Olivia, Maverynthia and Paige for my pain and suffering. I will be joining them on the Papercuts Podcast to discuss this atrocity we have all endured.

Because this book is just so very… typical. It was utterly awful in several ways.

A very very very very simplistic reading of this book would suggest there are no POC in this book – but I think that’s largely because an editor (yes, I actually believe this book may have gone near an editor despite all evidence to this contrary) looked at this and said “you’re going to make them POC? Nooooo, stop this Save the Pearls awful!”. This means the book is very very very very careful not to outright label skin colour of anyone. There’s one reference to Earth Walker skin colour:

“The dirty, earthy colour of all Scratchers”

Which pretty much makes their dark skin confirmed in the most utterly racist way possible.

Even if it were ambiguous and it is rarely mentioned, that doesn’t mean the racialisation of the Earth Walkers and the Tree Tribe aren’t clear. The physical descriptions have several markers – the Earth Walkers have black, coarse hair, broad noses; the Tree Tribe has blond hair, small noses. And these are just some examples – Mari spends most of the book hiding her mixed race identity using dark hair dye and darkening her skin and disguising her features with mud – which screams darkening her skin. Sure she could be disguising herself by being the person who is literally and clearly blathered in mud all the time

But… really? I mean can someone even live like this? She thinks the tribe ostracises her – but if she is this filthy all the time is it any surprise everyone backs away from her. Ultimately, another character openly comments that her skin is a different colour. It’s hard to avoid the idea that the Earth Walkers are not a POC analogue even if not POC themselves

And we know that with some extra really problematic tropes that have been dropped on them. The Earth Walkers are cursed – at night if they are not “washed” in moonlight the women become passive, despairing, depressed and suicidal while the man become animalistic, violent, savage rapists. So much so that even washed they cannot live with their wives and daughters because big angry rapey men – with POC coding this isn’t just problematic, this is disgustingly racist. Seeing this the Tree Tribe kills the animalistic men and enslaves the women – assuming they’re helpless, pathetic, incapable of helping themselves and the good noble tree tribe HAS to enslave them for THEIR OWN GOOD

Seriously, this white saviour narrative is so strong Cecil Rhodes would ask you to steady on a little. Not only are these magical slave/slaughter traits disgusting in and of themselves, but they’re also used as redemption for the Tree Tribe’s slavery. One thing this book does manage is to make it clear that enslaving the Earth Walkers is wrong – but this narrative of woo-woo JUSTIFIES them, it absolves them. They’re not evil, they just didn’t understand that this entire race of people they were murdering didn’t want to be murdered and enslaved. They’re killing them FOR THEIR OWN GOOD.

The woo-woo which causes the POC to rape and be enslaved is an appalling, insurmountable part of this book which pollutes my tablet with its presence. But it’s not the only issue – the way the Earth Walkers (coded POC) and the Tree Tribe (coded white) are described is utterly awful. The Earth Walkers are ugly – coarse, rough featured, plain; while the Tree Tribe are “refined”. This is the objective description of the two people – the beautiful blonds and the ugly, coarse POC who are rapists and enslaved.

This is awful – and a lot of this awful comes from Mari, our protagonist. Oh how I hate her. The only reason she isn’t the most hate of protagonists is because The House of Night and the hot mess of Zoey exists and give this heap of wasted trees 12 books I’m sure I’ll loathe Mari as muchl