Ritual Magic (World of the Lupi #10) by Eileen Wilks 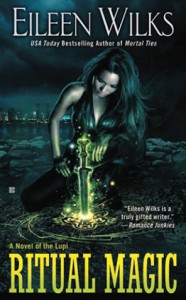 And the victim is her mother – her memory is wiped out, she thinks she is still a child again. And she is not the only victim.

And while the loss eats at Lily’s heart, reality itself is under threat and she tries to find the truth behind this bizarre and incomprehensible attack

I mentioned in the last book how much I absolutely loved Lily because of her professionalism, her logic, her intelligence; her careful way of addressing the problems. I mention her actual investigative skills and how absolutely awesome she is. Well I want to add another layer to that – I touched on her ethics last book but I really need to praise her integrity. There’s an awesome element of her not wanting to lead this investigation because it touches so close to her family – but she’s actually trusted to lead it, especially the shadow unit which has absolutely no accountability – because she is so concerned about the lack of oversight and bias that she can be trusted to be fair. Her personally acknowledged bias keeps her honest because her ethics, her integrity is so reliable that she is the one who can be most relied upon to second guess herself; that’s her integrity.

This is so special because of the genre; after all we have no shortage of protagonists who simply have to shoot people in the head or have to torture people. Usually with lots of angst about how terrible it is they have to murder people but they totally have to do it. This is not Lily – and not because she isn’t capable of murder. She knows she is – but that’s why she has such an iron hard moral integrity

I’ve said it before and I’ll say it again – Lily is an awesome protagonist with some awesome conflicts (including her difficulties with faith and her history as to why).

And this book lets us look more at her family, especially her mother. Like so many protagonists in this genre (I say this a lot about this series because they’re really good at subverting a surprising amount), Lily doesn’t have a great relationship with her mother. Even her larger family is something of a wider burden for Lily (except for Madame Yu who is, of course, absolutely awesome in every word). So to see more of her family, to see her have a full family, no-one tragically dead, no-one terrible or abusive. Just a genuine family who aren’t perfect, but do care for each other. Characters who can get really angry with each other but continue to move on and love

I’ve mentioned repeatedly how I like the world building of this story now it has focused down more – and I really like that this book is more willing to countenance that there are other forces out there: there isn’t just the Lupis’ own war no matter how epic and all encompassing that is. There are other forces, the influx of magic into the world has woke other powers – while still keeping the focus overall still on that great battle and how it is continuing to play out