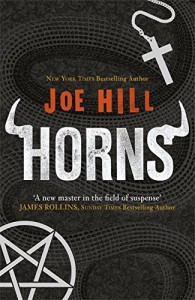 It's been a year since Merrin Williams, the love Ignatius Perrish's life was raped and murdered.  Not only ishe dealing with the loss of Merrin, everyone in the small New England town believes that he is guilty despite the fact that he wasn't charged let alone convicted.  On the anniversary of Merrin's death Ig heads to the place where his beloved died, and gets absolutely pissed. When Ig awakes the next morning he's alarmed to find horns growing out of his head.  He barely has time to deal with the fact that he has horns growing out of his head before he realises that their real curse is that they cause people he runs into to confess their deepest darkest secrets whether they want to or not.  Does anyone really want to know the secrets thoughts of the people they care for?

I picked up this book on a whim because I remembered that Daniel Radcliff starred in the movie based on the book.  I now officially believe that Radcliff owes me for the toxicity that my delicate constitution has been exposed to. Despite the fact that the protagonist wakes up with horns, Horns, is not a horror story; it's magical realism. It attempts to explore the nature of good and evil through a reinterpretation of the biblical scripture and the role of the devil.  Hill really works hard to have a discussion about the nature of evil, the degree to which we perform expectations rather than express our true desires and or feelings. Though the aforementioned applies to some to degree to all of the characters, it's particularly true of the psychopath antagonist Lee.  Lee has disdain for every person he interacts with and seeks to use them in a way that benefits him.  At the end of the day, Lee wants power in all of its forms and will to do anything to achieve it. Lee's hatred seems to fixate on women. He commonly refers to women as sluts, whores, bitches because he finds them to be disposable. He fantasizes about abusing his 15 year old neighbour, clubbing Glenna to death, that "irresponsible bitches who do drugs have to get sterilized".  Lee murders and rapes Merrin and essentially tortures his mother to death.

Unlike other books where one could argue that that the antagonist has been written this way to convey that they are evil and need to be stopped, the misogyny doesn't begin and end with him. The entirety of Horns is littered with misogynist language and just about every character engages in it.  Even children are not spared as we learn when a little girl throws a temper tantrum in the doctor's office.

"Several of them glanced at Ig as he entered, a few in a hopeful sort of way, fantasizing, perhaps, that the little girl’s father had arrived to take her outside and deliver a brutal spanking. But as soon as they saw him, they looked away, knew in a glance that he wasn’t there to help."

Ig doesn't even stop to reflect on how wrong it is that people are fantasizing about abusing a little girl to silence her. He just accepts it as though it's normal and yet he is held up as the moral arbiter in Horns. He doesn't flinch when Lee calls women the most misogynist names.

The only woman who is uplifted in this novel is Merrin and she is murdered and raped. Merrin knows what she wants out of life and who she wants to spend time with.  It's Merrin who initiates a relationship with Ig. Merrin doesn't last as a realised person for very long and quickly becomes this ethereal like figure to be worshiped and placed on a pedestal only to die for Lee's desire to possess her and Ig's man pain. By the end we know more about how Merrin's red hair looks like in the sun, the whiteness of her skin and the shabbiness of her wardrobe than we do of her as a person. The worst part of this all for me is that when Merrin is raped and murdered, she's actually thankful for the quick end because she has a fast moving form of breast cancer.

Even as Merrin is set up as an angel, Glenna, the woman Ig moves in with after her death receives the exact opposite treatment.  Glenna unlike Merrin is from the wrong side of town and poor.  She works as a hairdresser and is not valued by anyone, least of all Lee and Ig.  Lee calls Glenna a fat slut repeatedly and brags about using her for sex.  For Ig, Glenna is simply someone to fill the void with and he never really considers her feelings until the end. Glenna, of course, suffers from low self esteem and so it's suggested that she allows men to treat her badly.  Neither Ig or Lee take any responsibility for how they treat Glenna. She's just a warm body who exists for their comfort and to be pitied because she's poor.

Horns is the kind of book in which you actively hope that your particular marginalisation is erased but Hill is an equal opportunity offender.  There aren't a lot of people of colour in Horns.  The first actual person of colour we meet is Merrin's roommate whom Lee refers to as a, "butchy slant". In an interaction with Allie, a woman Ig meets at the doctor's office he learns that she is having an affair with her golf pro Michael.  Allie refers to blacks as jigaboos and believes that all black men covet white women, and that the speech of black people is continually littered with expletives.  Michael however is the exception to the rule because he "talks white".  Allie fantasizes of leaving her husband and child to be with Michael because of the size of his genitalia which she has nicknamed, "five-iron".  Could this be anymore racist?

There is only one disabled character - Ig's grandmother.  Because Ig's Horns force people to confess their misdeeds we learn that the woman actually utilizes a wheelchair not because anything is wrong with her hip or her stamina but because she feels entitled.  Ig's grandmother likes being pushed around in her wheelchair by her family as a way for them to pay her back for all she has done for them.  This is beyond toxic and plays up on the false idea that people are just faking disability. Disabled people constantly have gatekeepers validating the state of their bodies by the medical establishment and by including this character, Hill affirms the belief that disabled people cannot be trusted to be truthful about how their bodies function.