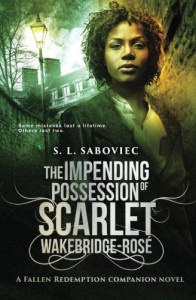 Scarlet is a well established executive living in Toronto. She's married to a French Canadian woman and has a teenage daughter. Like every family, Scarlet's has its ups and downs but she's happy or at least she was until she started seeing things.  After taking pills and seeing a psychiatrist fails to help her, Scarlet returns to the Catholic church.  Scarlet may be in possession of her body for now but her time is running out and if Father Angelo cannot help her, she just might find herself paying for a bargain she made in a previous life. The one thing Scarlet is certain of is that she was born to accomplish something big.

I'll be honest and say up front that the minute I saw a Black woman on the cover of The Impending Possession of Scarlet Wakebridge-Rosé , I instantly became determined to read the story.  It's not often we get marginalized women as protagonists in this genre.  To then find out that not only is the protagonist of colour but she's a lesbian and a mature woman of 49, I was absolutely thrilled.  Father Angelo, the priest who seeks to help Scarlet is Latino and Dante, the witch who encourages Angelo is Nigerian. Yeah for an inclusive series which feature marginalised people.

The Impending Possession of Scarlet Wakebridge-Rosé is absolutely a horror story.  As Scarlet's time begins to run out, as a reader I couldn't help but want her to be saved from the horror which awaited her.  Scarlet is not only strong, smart and brave, she's loving and protective.  Her family means more to her than anything else in the world.

Although, Scarlet is a Black woman, I really didn't get a sense of her culture.  As a Black Canadian myself, I know that there are many ways to experience blackness in the diaspora and so in this sense, Scarlet was really a blank page to me.

In Scarlet's previous life, she was a Jewish woman who was taken to a concentration camp with her young daughter.  At this point in the story, I became worried that Saboviec would end up appropriating an atrocity but Saboviec managed to come through this while at the same time making her story that much more horrific.  There's no sense that the demon caused the holocaust which is often what happens in these situations in stories and instead, the demon used the holocaust for its own ends as a vehicle to torture innocent souls.  I didn't even get the sense that demon is anymore evil than the evil humanity committed in the camps.  For the demon, the holocaust is simply a playground.

When Scarlet first enters the church she meets Kelton, Father Angelo's exorcism assistant.  Unlike Angelo, Kelton is an avowed sexist and absolutely homophobic and views Scarlet as a sinner and a danger.  Kelton very much embodies homophobia in the Catholic church and the reason why so many LGBT people have chosen to leave the faith.  Kelton believes his wife Beth, needs to seek his permission since he is the man of the household. He is also very much against Beth having contact with her lesbian sister Fiona, for fear that his sister in-law will corrupt his wife and children.  Kelton's so-called hatred is clearly based in his desire to express power and fear of looking weak.  Throughout the novel, he spews hateful rhetoric and even goes as far as to refuse to help with Scarlet's exorcism.

On the other side of this equation is Father Angelo who readily accepts when Scarlet makes it clear that she doesn't see her love of someone of the same sex as sinning.  Father Angelo goes as far as to talk about how love elevates us and therefore nothing about it could be wrong.  He tries to lecture Kelton about his backward attitudes, often losing patience with him.  Father Angelo goes as far as to invoke Pope Frank as a reason for Kelton to change his attitude, only to be told that Pope Frank is an old man in a dress.  I very much like that Saboviec painted Father Angelo as an outlier in the church rather than an example of how supposedly tolerant the Catholic faith is because it's miles from that, even with the addition of Pope Frank, who is more of a politician, than someone believing in equality.


I'm not certain that Kelton's character or story line are really needed in this novel.  At times, he really feels like a distraction and with demon breathing down Scarlet's neck unnecessary.  I do however like that Kelton's homophobia is absolutely disapproved of.

There really isn't a lot of lightness to The Impending Possession of Scarlet Wakebridge-Rosé. It's grim and dark but somehow so compelling.  I loved it all until the end.  Saboviec makes a point of shifting the focus between Scarlet's trouble with the demon and Angelo needing to confront his past actions and his spiritual beliefs. At the end, it feels that The Impending Possession of Scarlet Wakebridge-Rosé isn't really about Scarlet but Angelo, who survives his encounter with the demon and makes some big changes to his life. He's redeemed after a fashion but it leaves Scarlet's ending feeling so unfinished.