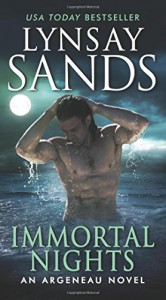 Things have not been going well for Abigail.  After her mother is diagnosed with cancer, Abigail feels that she has not choice but to drop out of medical school to care for her.  For months she acts as her mother's caregiver, putting her life on hold but its a sacrifice she's willing to make.  When Abigail's mother dies, the only relief that Abigail has is that the money she had saved for medical school and the sale of the house is enough to pay off all of the medical debt.  Unfortunately, this leaves Abigail with a few hundred dollars to her name, no job, no plan and feeling alone.  When she gets the chance to visit her childhood friend, Abigail jumps at the opportunity never guessing that will lead to her involvement in a kidnapping and ultimately, change her life forever.

It's book twenty-four and it's fair to say that there's nothing new about this story.  By this point, Sands is clearly writing her books by the numbers making it even more predictable than other paranormal romance novels.  Declaring a human a life mate is a short cut to get the romance happening thus explaining how one can claim to be in love after only eight days.  Even if I could tolerate the insta love, the idea of fooling around with a man you found in a cage after sneaking onto an airplane, while his captors are in the cockpit no less is beyond ridiculous.  Even the woo woo that is essential this this kind of story could not stop me from giving the whole thing the side eye.

Abigail, is like many of the protagonists in that she doesn't really have many ties, thus making it easier for her to simply run off with her immortal lover.  The one tie she does have have is her childhood friend Jet who she promptly forgets about the moment she lays eyes on Tomasso Notte. In my book, this makes her an awful person.  For all she knew, Jet could have been taken prisoner.  He could have been being abused and violated or even murdered but she was too busy getting it on with Tomasso to think about her BFF from childhood.


If Abigail only failing had been being a rainy day friend, I perhaps could have lived with that as a failing.  Unfortunately, Sands has created a female love interest with low self esteem, who constantly whines about how fat and unattractive she is. Sure to some extent there are women with body issues but Abigail is extreme and constantly doubts that someone as attractive as Tomasso could possibly be interested in her sexually.  She even wonders if Tomasso will want to touch her after seeing her in daylight as though she's somehow disfigured because she's fat. The whole thing fatphobic and downright anti woman.  Would it really be so hard for Sands to write a female love interest who looks at herself in the mirror and likes what she sees for a change?