The Vow by Laura Daleo 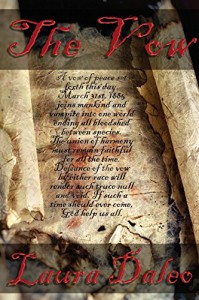 Claire Matthews has returned home from college to spend the summer with her family.  It's supposed to be a great time in her life but when she lands at the airport, her usually punctual parents aren't there. Claire takes a cab to her childhood home only to find police swarming all over the place. Though Claire prays desperately that her parents and her little brother are fine, it doesn't look good. When Claire learns that her brother is missing and that her parents are indeed dead from an apparent vampire attack, despite the vow which hundreds of years ago ended vampires hunting humans, Claire is determined to find her parents killer and her missing brother.  The investigation will see her team up with a vampire as she negotiates the vampire world for the first time.

I had my doubts about The Vow from the first page.  To be clear, dead parents are absolutely a trope in this genre and in this case, both of Claire's parents are found murdered at the beginning of the book, making it far from an auspicious start. It also didn't help that Claire was absolutely alone in the world. How is it that she grew up in that home and didn't have a single friend to turn to? Did they all just disappear when she left for college? I understand that the purpose is to further isolate Claire but it really doesn't feel believable to me. However, Daleo did a good job portraying Claire's pain viewing her parents bodies and her fear that her brother might also be dead.

Where Daleo loses me is Claire's hunt for her parents killers.  Claire actually accuses the first vampire she sees with nothing to base her accusation on.  She casually decides that said vampire is shifty because he won't submit to interrogation by her and leaves at the first opportunity. Daleo then doubles down by having Claire volunteer at a vampire center (read: feeding area) and then interrogate random vampires coming in for nourishment.  She ends up agreeing to meet with not one but two vampires and of course it ends badly.  If that is not enough, a vampire priest sends her on a wild goose chase which turns out to be a trap and then Claire follows up on this faulty lead by disturbing a vampire in its lair during day sleep.  I quickly found myself wondering how it is that Claire is still alive. Sure, her vampire boyfriend and the police are there to pull her ass out of the fire but at some point she should have learned that simply walking off to meet vampires in isolated locations is not a good idea. Daleo attempts to explain Claire's repeated stupidity by employing Claire's grief over her parents death and fear for her missing brother as justification.  In the end, Claire simply comes across as a bimbo, making me wonder how she got into college in the first place?

Despite all of the focus on Claire's vampire hunt and her family legacy of vampire hunting, I don't feel like I really know who she is. It doesn't help that we are continually reminded just how beautiful Claire is and that her blonde hair and blue eyes practically make her vampire catnip.  It makes me wonder if this is intentional, so that the reader can place themselves in Claire's position? The problem however is then magnified because Daleo employs this tactic with all of the other characters in the book.  Neither Daniels (the investigating cop) or Conner (the vampire boyfriend) feel at all real to me either. I'm going to chalk this up to the very limited character development in this story.

The Vow does not add anything new to the vampire mythology. Vampires have the ability to glamour, fly, and must stay out of the sun and can be hurt and or killed by holy water, crucifixes, and stakes. Having run of the mill vampires in my opinion is not necessarily a bad thing.  It's certainly better than having vampires who glitter in the sunlight.  The problem is that there isn't anything original about The Vow. Even vampires forswearing consuming human blood isn't new, though the manner in which they feed is.