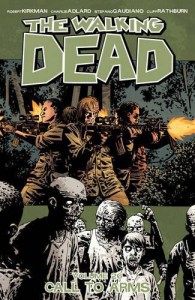 In the wake of the attack by the Whisperers, Rick has a lot to juggle.  With Ezikiel dead, the Kingdom is going to need a new leader and Rick is determined to get someone he trusts in that position. If that were not enough, Dwight not only refuses to head up the Sanctuary, he's not keen in taking a central role in the militia. Now that Rick has gotten control of Alexandria again he has to prepare his people for war.  This means going outside of the gate to practice killing walkers.  It's just what the people need but unfortunately since the paranoia is high, mistakes are going to be made.  Rick's main focus is getting the people to redirect their anger from him and so to prepare for an upcoming war, he doesn't see the danger an old enemy just might pose to all of his plans.

Volume 26 starts off very slowly. A large part of the problem with this volume is that there are still too many characters. Yes, I know that they just slaughtered quite a few, including poor pregnant Rosita, but there are too many to keep track of.  It's so bad that I had to google a few characters to figure out who they were in relation to the different communities and their history.  It's clear with things heating up between Alexandria and the Whisperers that there is a big slaughter on the horizon. I wonder if someone big will die, or if the writers will simply use this as an opportunity to trip the fat from the cast of characters?

One interesting development this volume is the fact that Eugene made contact with someone on the radio. He's clearly despondent with the loss of Rosita and her child that he is reaching outside for something.  Eugene tries to be crafty but being Eugene gives away far too much information about Alexandria, the challenges the face and even the number of people they have.  Both Eugene and the person he is speaking with agree not to tell anyone in their respective groups about their little chats until both are satisfied they can trust the other.  This could really go down one of two ways: Eugene is talking to someone who will later pose a threat to Alexandria, or Eugene is actually having a mental breakdown and speaking to himself. We have seen the later when Lori died and Rick supposedly spoke to her on the phone.  Given the fact that The Walking Dead seems to at the very least be rehashing things (see Negan), we might very well be seeing a mental breakdown.

For much of this comic, I found Rick to be pretty insufferable.  Due to the challenge to his authority , Rick is determined to create a strangle hold on his power and to place people he can trust (read: manipulate and order around) in positions of power. His first order of business is to place Michonne in charge of the Kingdom in the wake of the death of Ezekiel. This is disturbing given that for a time, The Walking Deadseemed to want to shift the relationship between Rick and Michonne and remind us that they are indeed friends. Now that Rick is threatened however he wants Michonne in a leadership position.  They make this work by having Michonne claim that she was thinking of taking over the Kingdom and simply needed a kick in the ass to do so.  At this point, I really want to see Michonne get out from under Rick and come into leadership and power on her own accord.  I want to see her make her own decisions without always waiting to see what Rick thinks or wants.  Finally, I want her to be so much more than Rick's favourite weapon of choice.

In furtherance of his goals, Rick wants Dwight to take over leadership of his newly formed militia. Dwight left the Saviours precisely because he didn't want to lead anyone but his objections mean absolutely nothing to Rick, who declares that it's too late.  When we later see Dwight take to zombie training wielding the infamous Lucille, it really is a declaration as to where his head is at.  He uses Lucille because he sees it as a symbol of oppression and by not being given freedom of choice to decide what role he will play in the various communities, it's clear that Dwight is once again living under a strongman who simply has the appearance of being kinder.

Somehow, Rick even finds time to be magnanimous while he is having Alexandria covered in propaganda.  In the last volume, we saw that the people responded to the attack by the Whisperers by blaming Rick and questioning his leadership.  Now that Rick has redirected the community's anger by having propaganda posted, he's more than happy to accept thanks from Vincent for not exiling him. It's absolutely gross to read as Rick tells Vincent that he's giving him the chance to do good in the future and make up for his actions.