Legacy of the Demon, (Kara Gillian #8) by Diana Rowland 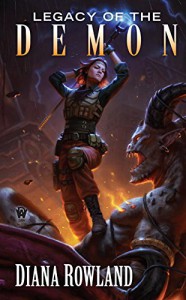 Kara has had her power cut and is isolated away from the demon lords (except one). But she has no time to just sit back without power – her best friend is bereft, her baby is missing

And the world is under siege – there are rifts appearing everywhere, spewing out demons, some of them completely unlike anything Kara has seen before. The world knows about demons – because they’re under constant attack and have very few experts who can actually fight back.

While the demon lords are overwhelmed trying to stop the end of both their worlds.

I actually had trouble getting into this book. Because it’s all there! This book series is now eight books long and it’s all in this book. All of it. Things that happened in all the seven books before this, all that rich world building, all those dramatic events, all of those amazing storylines and characters and world building – it’s ALL THERE

Honestly, I wish, sincerely, that I had the time to start again on book one and appreciate every little part of this amazing story because I think this is really the only way to truly absorb the hugeness of this book.Especially since it has been a year since I last read this excellent series.

This reminds me of just how very rich this world is and how much has grown from the very beginning and is still growing. This book contains so many absolutely amazing developments, revelations which builds so much more on this word. I love that there is more to develop, I love that there is so much more to this world than we have seen and that when we finally thought we had so many answers it actually turns out…

Yes I was always going to use this gif

In any other book I would yell “too much!”. And I’m not even sure why I don’t on this one. There’s so much here. The world building grows exponentially with revelations about the demon world, the nature of potency, the nature of the Demon Lords, the rifts, the demon clans, the history of the demons – that’s all huge world building developments. It’s immense and makes the whole world look so much different and have so much potential for more stories. Then we have Kara’s relationships, Mzatal, her aunt, her own history, her power, her new friends, her old friends. There’s amazing complexity like how she deals with Rhyzkhal.

And oh how I was suspicious about this because it looked like we were going to go down that horrible redemption train route with this utter villain – but even while he was humanised and Kara saw more to him than the many who persecuted and tortured her, she still also maintained her anger. Ultimately her decisions and evolution towards him felt a lot more like her own growth and revelations than ever it was actually about him – yes, it felt like a quasi-forgiveness path that focused more on the victim. I still can’t say I was happy by it but it was far more substantive than a standard rapid redemption pathway.

Then there’s her relationship with Jill which is PERFECT. I mean they’re not perfect – they’re sometimes short with each other and say careless things and they understand they forgive and the apologise and they love and care for each other and it’s just such an awesome, amazing friendship.

There’s some really excellent, complex biplay between Kara and Idris (because every relationship here is complex and excellent) and some great interactions with people she doesn’t get on with but is willing to work with.

Oh and Kara is badass and totally in charge. She’s an expert, she knows it and she is respected for it.

On top of that we have some really great action scenes and a whole demon invasion and Kara taking point and control above and beyond the Lords or anyone else. And a demonic mutation plague. And kittens!

All of this? It should be too much!