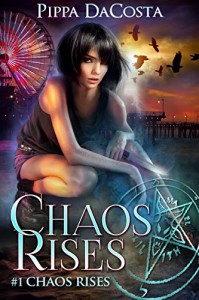 Gem and her brother Del are half-demons – which is a difficult in the world after the demon invasion. Humans want to destroy or imprison them. Full demons want to enslave them. Gem and Del have made terrible decisions to keep the safe.

This is a semi-dystopian world where the population is recovering from the aftermath of a (possibly brief) demonic invasion. It doesn’t seem to be too different from out world – but there are demonic zones and creatures lurking around

This leaves the demons still on Earth both as creatures to be feared and also creatures that are targeted by humanity from what I can see. While the demons themselves have complex powers, their own culture and their own history

This is one of the few occasions where I actually say I need more world building info! It’s common for initial books in a series to dump too much information in. But this world is big, it has history, we have the demons before the veil, the veil collapsing, this apparently leaving demonic places on earth. We have the elements, we have courts and demon kings and queens and princes, we have lesser demons. We have the half-demons, we have the Institute. A lot of this has history and world building implications which isn’t just good for my nosy, world-building loving self, but it would also really help understand what is going on, understand these characters, understand them and how they relate to the world. I neeeeeed more

I mean I can follow the plot, I can extrapolate, but I feel I’m having to extrapolate a lot. I actually had times when I’d love for one of the characters to confirm what I’ve extrapolated. I actually found myself wishing for an info-dump. Just one person sitting down and giving me a really convoluted “as you know” would be nice. And I can’t believe I just said that. It says a lot about how much I want to see more about this world – this awesome world.

As for Gem, the main character… I have conflicting thoughts. On the one hand, I don’t like her. I don’t like her decision making process. I don’t particularly rate her thought processes, the situation she is in or her place within it – including how she navigates it and thinks about it. I don’t think she worked particularly well with Torrent either – she seemed to either follow his lead for much of the book or make very very very very bad decisions.

At the same time, I understand much of her character (except her whole killing machine past thing which still could use a lot more development). I understand (kind of) her desperate attachment to her brother (but oooh wanted to see more of him, their relationship and his powers and why she was so concerned about them) has led her to believe things she knows are not true. I know her vulnerability has caused her to cling to the abusive Allard in the hope he will protect her, shield her and bring her brother back. I understand her desperation causes her to make bad decisions based on the slimmest possible chances of it work out