The Beast Within by Julie Evans 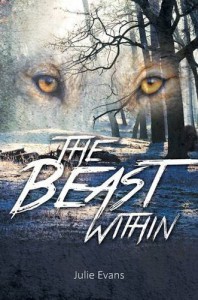 This book is a struggle for me – because when I write a DNF review I normally have a minimum read requirement. I try to read at least a decent percentage of the book before I put it down and say “no, I can’t do this. I won’t do this. I don’t deserve this!”

This book is a little over 100 pages long, so reading a decent chunk wouldn’t be so hard… I tried to convince myself.

No… this was horrendous. I could not endure my way to half way, reaching a quarter is out of the question

I am trying not to be excessively cruel about this. I mean I didn’t drop this book because it was offensive, insulting or outrageous. I dropped it because it has, quite simply, some of the worst writing I have ever read. Quite possibly the worst. I actually spent a decent chunk of the last week grabbing random friends and demanding they read 5 pages to check to see if I were hallucinating.

I was not. I even had to resist the urge to email the publisher back and ask if they were serious, was it April Fools, were they trolling me and/or if they realised they had an editor who was being bribed by the competition?

Here is an excerpt of text:

So when Em came around this morning with the groceries I asked her to get me, she said that I was going out with her tonight, and she wasn’t taking no for an answer. When I went to protest she held her arms up in the air, and said“Stop there before you say another word, you are coming out with me and that’s that so don’t argue, I know it was awful what happened but it was nearly four months ago, and you need to start getting out of the flat and back in the land of the living, so you are coming out with me tonight, to the new club that hasn’t been opened all that long, up in town: Crimson Moon. So I’ll pick you up about 9 o’clock, so be ready.”
“Okay but I’m not staying out too late, just for a few hours.”
“Great, that’s fine. I’ll see you later Kat, and make sure you’re ready.”
“Fine, see you later.” With that, she was gone.

Behold that SPLURGE of awful. The whole book is like this. The whole book. Here is some scintillating romantic dialogue with the designated love interest: