Blood Challenge (World of the Lupi #7) by Eileen Wilks 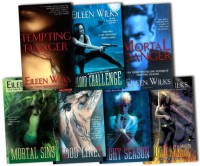 Lily’s engagement to Rule has put her on the hit list of many hate groups – but when there’s a campaign against her, the people she cares for her boss and even a werewolf going on the rampage it’s clear she’s dealing with something far worse than the vandals who sabotaged her care or the people sending her hate mail.

Meanwhile Benedict has found something impossible – Arjennie… a second Chosen

This series has had some ups and downs – and this book is definitely continuing the direction upwards after all of this huge and dazzling world setting has now been absorbed and we’re now keeping the focus on what is relevant. This book takes this wonderful, wide world and makes sure we don’t drown in it while we also don’t ignore it. It’s a lovely balance – this wide world isn’t ignored but nor are we left flailing to try and understand what is relevant in the vastness

And against this backdrop we have some very intriguing characters; the new character being Arjenie. And I love her. Oh how I love her. She’s hilarious, she’s aware yet almost niave in how easily distracted she is. I love her geeky adoration of facts. I love her courage without it being flashy or violent. I love the fact she’s not physically dangerous – and her disability definitely does case her physical limitations – but that doesn’t make her less active or courageous.

There’s also Rule with his fascinating conflict over the Mantels and his relationship with the Leidolf – making good decisions but not emotionally connected ones, feeling duty bound but not emotionally bound is something else that will be good to see.

Other nice gems for me was seeing more of Isen, the Rho of the Nikolai pack. He’s always there as a distant figure and we’d already had excellent moments when he made a distinction between speaking to his sons as both his father and their leader. It makes him both a skilled leader AND a loving and caring father. And, in this book, we increasingly see him as an effective ruler. But better than that – he’s an effective ruler because he likes people. He’s interested in people. He studies people and he uses this knowledge to actually reduce conflict in his Pack

The protagonist – or co-protagonist – is Lily who is always a favourite character of mine. Capable with woo-woo without having super powers. She’s strong without being Spunky, she makes good decisions and has some excellent moments of emotional conflict when faced with her own mortality in this book. I also love how she continually applies logic and cold fact to the faith and woo woo of everyone around her.

Throw in some politics and, yes, the Lupi not being all united and being very human in their objections and I really like how these characters and this storyline come together

One thing I really like is further analysis of the mating bond of the Chosen. I’ve made it no secret in many many many book reviews that I loathe the idea of magically compelled love. I think it’s extremely lazy writing and I think it’s a horrifying violation of consent. I think it’s terrible to basically replace attraction, affection and conscious choice by having some magic smoosh two people – and their genitals – together. I can’t express how much I hate it and generally forcing people into relationships

Yes some of it is played in Benedict angst, but it’s also used to examine his acknowledgement that Arjenie adamantly protects her own autonomy and privacy. Arjenie greatly values her personal space and Benedict, rightly, is deeply concerned to how she will react to the bond. He doesn’t expect the bond to automatically fix all of this

Of course there’s a happily ever after – but I like that there wasn’t always and there’s a strong indication that it COULD go terribly wrong and magical forced love doesn’t cure all.