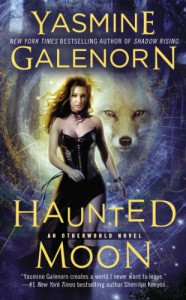 There’s a new front opening in the war against Shadow Wing – cemetaries are being ransacked of ghostly residents, zombies being raised and a new, sinister psychic network has started in the city

Their all too brief holiday is over, it’s time for Camille and sisters to get back into the action

This world continues to be huge beyond all measure – we have the massive range of different beings, the fae, the elves, dragons, demons, the wereanimals and vampires and witches and magic users of various stripes. We have the different realms, the threat that the demons represent, the battle on so many levels across so many plains. It’s huge, it’s vast and every single part of it is used and involved excellently

While, as I’ve mentioned below, this can lead to some distraction, it also creates a book where everyone lives. Camille and her relationships are really passionate and powerful. They’ve really done a good job of building a home life in the story along side the massive battles against everything this huge world can throw at them. The characters have also grown a lot since the first book. Ok, a lot of that is in the many new shiny powers they have managed to hoard, but there’s also how they grew as people, how they’ve found their level with their various other characters (though I still hate Camille’s relationship with Smoky).

There’s also a real sense that they have built something. For a while I thought we were just going to have random monsters every single book without any real sense if progress. But it has become clear that the war isn’t just about the spirit seals, but also about the networks and allies that Camille and her sisters are building. The war will come, and it won’t simply be a case of who owns the most spirit seals wins. I really wish they’d focus on this far more – the preparation, what the susters have achieved.

Camille has a very high sex drive. And with her three husbands I’m more than tempted to wave a flag and cheer her passionate sexual agency. She is in charge of her sexuality, her desires, her wishes. She dresses sexily, for herself and she feels not the slightest shame as she lives her life loud and clear.

This adds to a general padded feeling of the book which is something we’ve mentioned over and over again through this series. A lot of the old problems continue – the extremely detailed description and dwelling off every meal plan. But we also get lost in the world building – I get it, this world is huge and, as I said, amazing. But not everything needs mentioning every time. Like if the sisters are fighting zombies, we don’t need a brief aside on the many other kinds undead out there. They’re not relevant. And oh ye gods enough with the Stand Alone Stuffing. We do not need the same “let me introduce myself” with every book. This is book 13. THIRTEEN. We know who Camille is.