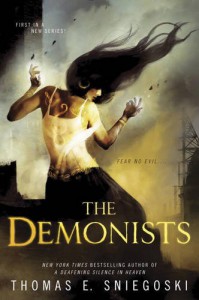 John and Theodora are television psychics. Who actually find the thing that goes bump to the night – and destroying them, banishing them and removing them.

Until they find a well of darkness that is way way worse than anything they had encountered before. New dark forces are rising with both them personally under attack – and the entire world in the balance.

John and Theodora make an awesome team, backed up with John’s deceased, ghostly, yet still effortlessly awesome nana, these TV paranormal investigators are actually the real thing. Their battle against the darkness – along with the parallel story of a whole new dark force rising are both immensely creepy. The sense of this book – the darkness, the grief, the horror and (I’ll keep saying this over and over again) the overwhelming creepiness are really well done. It’s thematically excellent. So very very excellent – the whole feel of this book is perfect.

I love Theodora’s storyline the most. The way she was almost destroyed by the demons, saved only by her husband’s dedication and devotion – and new allies – and then turned it into an immense strength was excellent. I don’t want to spoil this which makes it so so so hard to adequately describe the awesome here – but she goes from bed ridden and helpless to the one leading the charge, telling the darkness who is boss and embracing a whole new existence of possibilities. She is awesome and her power is book changing.

The plot has lots of excellent action, twists and feel and is excellent to read.

I have that issue that keeps coming up a hundred times in the books I read – a kind of unsupported middle. We kind of waffle for a bit and lose any forward momentum. But as I read the words I’ve just written, I realise that it’s less about the middle of the book and far more about the whole book and the lack of coherent world building

This is the issue which stopped the book being a complete win for me. We have ghosts and demons and magic… and no reasoning behind any of it. It just is. No looking at what this is or how it’s done – and the whole story kind of rests on this. A large part of the plot rests on an elder demon who ends up in conflict with some other demons with no real explanation as to either. Our main character, John has apparently had a career of fighting the evil supernatural creatures but we don’t see that career. We have John‘s awesome grandmother ghost… but no history or background. John‘s wife Theodora is a medium – what does that mean?

I can’t stress how much this matters to the plot – those demons and what they do with Theodora is an essential cornerstone of the book. We have a whole organisation of people who are fighting against the darkness but beyond some references to the Vatican there’s, again, little information behind it.

I feel like we’ve jumped in on book two of the series and the introduction has been skipped. Which is a shame because, again, the plot and the concepts are excellent. The characters are interesting. The writing is excellent and has a whole lot of tension and epicness about it. It has an excellent sense of horror and creepiness (seriously, the harbinger of the dark demon is an excellently well crafted creep show on an epic level). Theodora is awesome, in charge and amazingly not in her husband’s shadow, a damsel despite her rescue or in any way secondary.  There’s a whole lot of good here.

Diversitywise… well we have a moderately compact cast which is my preliminary shaky way of saying don’t expect a great deal. We have a gay man who is a personal assistant (LGBTQ servant trope!) who barely appears and is actually sabotaging his own relationship in the name of serving John and Theodora.

Theodora is, as I’ve said, repeatedly awesome and managed to avoid so many of the usual tropes, especially when the first half of book seems to be about her being victimised – but that is so wonderfully turned round and her strength becomes the primary force of this book. We also have ghostly Nana who, despite her brief appearance, manages to be absolutely incredibly awesome. Considering the small, tight cast, those two characters are notable.