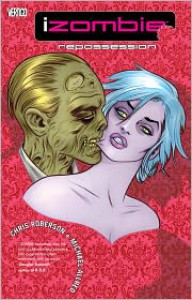 With the zombie horde pretty much taken care of, things should be settling down in Eugene but a larger threat is looming. Xitalu is coming though the dimensions to earth and his plan is to devour everything in his path, leaving the earth empty and devoid of life.  Gwen quickly finds herself surrounded by the people she loves and has to make the choice of her life - drain the souls of the people she loves and then sacrifice herself to Xitalu, or do nothing and allow the earth and everyone who resides on it die.  What will our favourite zombie girl do now?

Unlike all of the other volumes in this series, Repossession is fast paced to point that it feels completely rushed. I know that the creators had planned for a longer series and so I understand why they had to wrap up all of the loose ends as quickly as it did.  That being said, it really feels to me like Repossession jumped the shark.  I much preferred the beginning of the series where Gwen worked as a grave digger and hung out with her friends in her off time.

Gwen really doesn't grow much throughout the series at all and this probably because iZombie had such a short run.  I very much enjoyed her friendship with Eleanor in the beginning but as the story progressed they seemed to spend less and less time being with each other and seemed to have separate story lines that were tossed together at the end. Sure, Gwen finds a way to keep in contact with Eleanor after the big confrontation but it's only to tell her story and not because she wants to keep in contact with her friend. This in part is why I much prefer the beginning where Gwen and Eleanor would head to the coffee shop and meet Scott/Spot

Though Scott/Spot spent Dead to the World and part of uVampire mooning over Gwen, he actually ends up with Gwen's brother Gavin.  Gavin and Scott/Spot's romance is extremely rushed because it plays out against a backdrop of Xitalu attempting to suck the world dry.  Scott/Spot of course is nervous and awkward and he repeatedly tells himself not to mess this up.  Spot/Scott's attraction to Gavin is something new and having never been intimate with someone of the same sex before. he's not sure how to feel or what to do. Scott/Spot isn't even sure that he is gay/bi. When Gavin moves in for a kiss, Scott asks for more time which I am happy to say that Gavin respected. Unfortunately, because Gavin is possessed by another soul, he ends up see flipping between trying to draw Scott in and pushing him away.


One of the causalities of a rush ending is that we really didn't get to see the relationship between Gavin and Scott develop. Yes, we had that one night of them watching television together but that's it. I suppose I should be thankful that Scott and Gavin end up married and running a non profit together but I cannot help but feel robbed by the whole thing, particularly given the amount of homophobia thrown at both Scott/Spot and Gavin.  It's particularly troubling that the only time the anti gay language was labelled homophobic, is when Marvin called Gavin, "tinkerbell" and "fairy".  I was glad to see these gross comments finally called homophobic but I would also have liked to have some of the other characters present at the different events of homophobic language speak up as well.