Hard as a Rock (Gargoyles #3) by Christine Warren 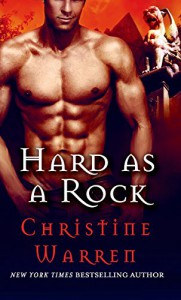 Wynn Powe comes from a long line of witches.  As a child, Wynn thought that she would grow up to be a member of the Guild and maybe even have her own Guardian to watch over.  Because of the extreme sexism of the Guild, Wynn gave up her childhood dream and watched as her brother fulfilled the role she had once dreamed of. When Wynn finally does get her wish, it's nothing like her childlike fantasy and the Guardian she had once dreamed of, may just want more from her than she is prepared to give.

Hard as a Rock is book three in the Gargoyles series and at least as far as the romance portion of this series, the story has gotten pretty formulaic.  A woman with magical powers wakes a Guardian - a gargoyles who can shift into human form and bound to protect humanity from evil.  Said Guardian is initially amazed by his feelings for the woman but quickly comes to realise that the woman in question is his mate. The female love interest is quickly aware of her attraction but struggles against the idea of a fated mated but by the end of the book comes around. Were the Gargoyle series just about getting to the HEA, I don't think I would be willing to continue.

Warren does seem intent to use one book to wake each Guardian which very much makes the meta feel at times as though it is being dragged out unnecessarily. It's worth noting however that this is a case of mileage may vary.  Though the Gargoyles series is paranormal romance, as evidenced by the Man Titteh on the cover, it also has a very interesting meta which has the characters actively investigating dark magic. It is the latter element that has drawn my attention to the series; however, if you are reading this series especially for the paranormal aspects, you many not mind the slow down in the meta which happened in this book.

Though it is part of the formula to have the female love interest deny her feelings for her Guardian, I really like that Wynn's dissent is based in the idea that if she succumbed to her lust that she would be giving up her free will.  That being said, the importance of agency ends up of course being mute when Wynn gives in and agrees to become Knox's mate. The fact that Knox and Wynn are set up as a couple means that they never address the fact that he is slow to accept her limits and borders on abusive.

"Get off me,” she growled, matching him bared teeth for bared teeth. In another moment, he might have found her attempts at ferocity amusing. Now they just confused him. She wanted him, the beast insisted, wanted him almost as badly as he wanted her, so why was she pushing him away?

This time, he felt a jolt of energy behind her shoves. She still lacked the power to physically move him—he was easily twice her size—but the force broke through the urgent lust clouding his mind, and he eased back a few precious inches.

"That was a really bad idea,” she stated, her voice eerily calm and filled with tangled undertones of anger, fear, desire, and frustration. “I think it would be best if we each got some space and took a little while to cool off. I’m going to go into my bedroom, and I’m going to lock the door.” (pg 84)

Because Knox is certain that Wynn is attracted to him, he doesn't comply immediately when she tells him to stop.  Warren uses woo woo to explain Knox's supposed confusion at an explicit request to stop sexual activity.  Wynn has to actively attack Knox to get him to back off and then tell him that though the he is capable of breaking down her locked door, she expects him to respect her space. None of this should have happened, nor should Knox have had to be told that he couldn't just claim a woman for woo woo reasons.