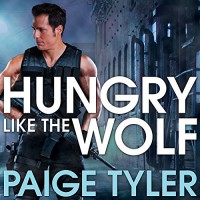 Mackenzie Stone is an investigative journalist.  All of her instincts are telling her that there's something dirty about the Dallas SWAT despite all of the accolades they have received from the city.  After repeatedly requesting a ride along or to spend time with team, Stone finds herself squarely shut out.  Out of options, she sneaks onto a crime scene forcing one of the officers to save her. Realising that Mackenzie is only going to continue to be trouble until she gets her way, SWAT team commander, Gage Dixon decides to let her into the compound hoping that perhaps if he can distract her long enough, she'll give up the chase and never discover the dark secret he is hiding.

I really liked the idea of a professional woman out to find a scoop but this is not the way that Tyler wrote Mackenzie.  I expected a hard as nails reporter, who asked toughed questions and kept her eyes open.  What I got was a woman not above attempting use her sex appeal to manipulate answers and an idealist who seemed ridiculously naive given the things she supposedly had done. Instead of seeming like she was actually investigating, more than anything Mackenzie came across like a snoop and no one likes a snoop. Any woman in the position that Mackenzie is in would have faced sexism and had to be tough, and so the idea of her counting T&A to do the reporting for her really irked the hell out of me.

Mackenzie decided to be ruthless when she discovered that Gage and the rest of the officers on his team are werewolves.  Seriously? This after the man risked is life and that of the men he considered to be brothers to save her sorry life, she decides that the world deserves to know the truth. Gage even explained that they would probably lock the officers up for medical experimentation and that it would risk their lives but little miss I have to get a story, though the officer weren't doing anything illegal and in fact risking their lives for the citizens of Dallas on a daily basis couldn't be swayed.  It's only when she talked to her photographer friend Zack and she realised that she had feelings (more on that later) for Gage that she changed her mind. It seems little miss idealist, I believe in the power of truth has absolutely zero morals.

Gage is the typical alpha male type werewolf. He's protective, fiercely loyal, and brave.  He suffers from PTSD after the men his entire platoon died in Afghanistan, leaving him as the sole survivor.  I wish that Tyler had focused in on this more than the constant descriptions of Gage's physical appearance, and how good he smelled and tasted. It would have given us a stronger sense of his character.  I really didn't need to know that his dick tasted wonderful anytime that Mackenzie went anywhere near it.  Even for paranormal romance, this was a bit much.  It caused their sex scenes to read like badly written porn.  Yeah it's nice to sexually please one's partner but women don't moan and carry on at the taste of a man's cock, no matter how much woo woo is involved. I cannot believe Tyler forced me to write that sentence.


The antagonist in this story might as well have been twirling his mustache.  Hardy is a crime boss who decides to go after SWAT when in the course of their raids, they end up killing his son.  What I want to know is how this crime boss was smart enough to come to power and yet still decide that it was a good idea to war with the entire police force?  Yeah, I get that he is mourning but this is ridiculous.  If that weren't enough, when the cops did raid his place, Hardy just casually had all the evidence lying around that they needed for an arrest warrant.  Really?  A crime boss insulates himself and has the underlings take the fall.  What he doesn't do is leave evidence just lying around waiting for the cops to come and pick it up. I call shenanigans.