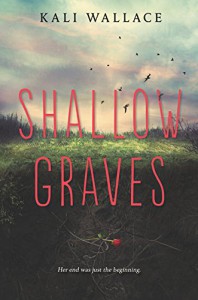 17 year old Breezy is on the cusp of adulthood.  She's about to graduate high school and has made plans to follow her dream to become an astronaut.  The future looks bright until she takes a fateful walk home and wakes up a year later in her own shallow grave.  Birds fall out of the sky announcing Breezy's return and she kills the man who helps her crawl out of the grave.  Breezy knows that she cannot go home but has no plan about what to do now and so she hitchhikes across country, performing experiments to see just how indestructible she is now. Breezy's life might have gone on that way if she had not run into a group of religious zealots determined to rid the world of its monsters.

Wallace jumps right into this story with little set up about what is going on. This is a little bit disconcerting at first but presents a challenge to figure out exactly what is going on with Breezy. Shallow Graves is told completely from Breezy's perspective which gives us an inside track into what she is thinking.  Normally, I'm not overly fond of young protagonists but in this case, Breezy certainly didn't read like the seventeen year old that Wallace set her up to be.  Breezy was thoughtful, curious, analytical and very smart. Even though Dark Graves is an incredibly dark story, I found myself genuinely liking Breezy and her penchant for killing murderers.

Wallace has set up Shallow Graves as a one off and that's really a shame.  I feel as though she left a lot of unanswered questions at the end of the book, leaving it feeling somewhat unfinished. Part of the problem is that Wallace seemed to keep switching directions in the story.  First, we have Breezy kidnapped by a religious cult who are convinced that the so-called monsters are all evil and must be eradicated to protect humanity.  Breezy manages to make her escape with a Nightmare and learns that monsters are simply part of nature and have been labelled as monsters because humanity is afraid of that which it doesn't understand.  Breezy happens to then shack up with a pair of gouls who are brothers but she is plagued by the idea that the darkness which is inside her can be removed.  Breezy then heads off to see what the cult calls mother and learns that one must really be careful what one wishes for.  Breezy then decides that has to deal with the person who killed her.

Unfortunately, Shallow Graves also meanders around. I am fine with a story not having a linear narrative but having a non linear narrative and then repeating knowledge just a few pages later is irksome to say the least.  It felt as though Wallace was trying to draw out Shallow Graves so that he would be longer than a short story.  This problem could easily have been solved if Shallow Graves didn't skitter about the place and if it had invested more in world building.  We learn that Breezy is a revenant, that humans can do magic but it requires a death and that there are multiple creatures coexisting with humanity.  We learn nothing about how magical creatures are organized, or any of their history.  Even Breezy's interactions with ghouls doesn't make much sense.  Why exactly do they feel compelled to help and shelter her?  Why do they care where she ends up? Why do they advise her?  They know nothing about her and barely understand what she is but there the brothers are playing tour guide of the monster world and functioning as a convenient taxi when needed.  So much more could have been done with these characters and instead what we got was repetition about Breezy being dead, not knowing how it happened and her death count.

Shallow Graves is the first book that I've read in a long time to have a marginalized protagonist. Breezy is both a woman of colour and bisexual.  Breezy is half Chinese but Wallace includes no real cultural markers to her character.  I did find it a bit stereotypical that Breezy had no problems with math and science but struggled with humanities; however, that being said, it informed her personality in a way that I haven't seen in some time.  While Breezy's experiments in suicide reminded too much of Heroes (save the cheerleader save the world) how she used scientific anecdotes to explain her feelings and how the world viewed her is great. Even before Breezy became a revenant, as much as Breezy was interested in science, mathematics and space, she was always interested in death.


Breezy however does experience racism.  When she goes to a party at the Fordhams, Mrs. Fordham asks her daughter, "Why don't you ask that nice Oriental girl to help you study? They're very good at school, you know.  It's a part of their culture" Despite how extremely offensive this comment is, Breezy doesn't respond to the woman at all. On a page concerning Breezy's disappearance, someone writes, "Ran away with an older boyfriend, maybe she promised to love him long time, get it, it's just a joke, don't be so easily offended."  Since this is just a comment online, Breezy doesn't really have the opportunity to respond.  This however makes two instances of racist commentary where Breezy is silent and in fact, expresses no opinion on what it feels like to be targeted with hate speech. Unfortunately, the only time racism is called out is falsely.  When Rain confronts Zeke about his hatred of humans, she calls him a racist.  Zeke fearing humans is rational, particularly given that humans have a history of hunting down people like him and killing them without warning or cause.