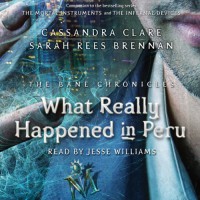 Of the characters in The Mortal Instruments series and The Infernal Devices series, it's fair to say that Magnus Bane is the most interesting.  When I discovered these short stories, I chose to read them to learn more about his life before his entanglements with the shadowhunters. Being immortal, it suggests that Magnus must have had adventures we can only dream about

As the title of the story suggests, it's all about finding out exactly what Magunus did to be banned from Peru.  After each mini memory, we are told that this is not the cause of Magnus's banishment. It leads one to believe that Clare and Brennan are leading up to some sort of spectacular  debaucherous tale of excitement and adventure, only to have the short story end with no answer as to why Magnus got banned.  Did these two authors just run out of ideas?  Did they just decide at the 65 page mark that they had written enough to legitimize a sale and therefore no longer felt duty bound to at least answer the basic question of What Really Happened in Peru? Someone needs to tell Clare and Brennan that when you ask a question, writing an ending like the following is a cop out.

"The High Council of Peruvian warlocks met in secret, and a letter was sent to Magnus several months later announcing that he had been banned from Peru, on pain of death, for “crimes unspeakable.” Despite his inquiries, he never received an answer to the question of what he had been banned for. To this day, whatever it is that actually got him banned from Peru is—and perhaps must always remain—a mystery."

The upside to What Really Happened in Peru, is that we got to find out a little bit more about the childhood of typical warlocks. It seems that warlocks largely come into being when a demon rapes a human female.  A lot of the time, Demons use rape by deception to accomplish their reproduction. The Warlocks who make it to adulthood do so because there mothers love them unconditionally despite the circumstances of their conception or the markers of what they really are, like Ragnor Fell's green skin for example.  "Our fathers were demons," said Catarina. Our mothers were heroes".

Magnus it seems is the exception to the rule.

Magnus's warlock's mark was his eyes, the pupils slit, the color lucent and green-gold at the wrong angles, but these features had not developed immediately.  He had not been born with Catarina's blue or Ragnor's green skin, had been born a seemingly human baby with unusual amber eyes. Magnus’s mother had not realized his father was a demon for some time, not until she had gone to the cradle one morning and seen her child staring back at her with the eyes of a cat.

She knew, then, what had happened, that whatever had come to her in the night in the shape of her husband had not been her husband. When she had realized that, she had not wanted to go on living.

Magnus did not know if she had been a hero or not. He had not been old enough to know about her life, or fully comprehend her pain. He could not be sure in the way Ragnor and Catarina looked sure. He did not know if, when his mother knew the truth, she had still loved him or if all love had been blotted out by darkness. A darkness greater than the one known by his friends’ mothers, for Magnus’s father was no ordinary demon. (pg 34-35)

I like that there's absolutely no shame for the victim or denial of what they went through to raise their children to adulthood. By talking about the reaction of Magnus's mother, it makes it clear that rape is a violation and some people never ever get over it. It also explains why Magnus is as powerful as he is and why he is so ready to accept the love of those who are mortal.


What Really Happened in Peru, confirms Magnus's bisexuality because he is paired with both a man and a woman.  When he seeks out a new lover, Magnus will stop at nothing, including torturing his flatmates with his music playing.  Unfortunately, because of what Magnus is, he can never really truly be honest with his lovers about who and what he is.  This is actually more of a problem for Magnus than being openly bisexual.  Clare has a bad history of not following through with homophobia in this world.  I find it hard to believe that from 1791 - 1962 Magnus actually faces zero homophobia.