Doctor Who: The Stealers of Dreams (Doctor Who: New Series Adventures #6) by Steve Lyons 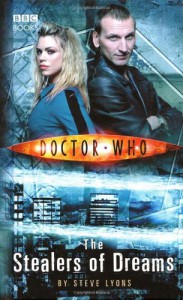 In this latest adventure, Rose, Captain Jack and of course the Doctor, land on a planet where fiction is outlawed. Residents are not allowed to use their imagination and lies are punishable by imprisonment and forced psychiatric treatment.  The Doctor is quick to notice that progress has stagnated.  It seems that without the ability to dream and imagine, humans cannot advance because they cannot conceive of innovation.  The Doctor is on the case but it seems that Hal Gryden, with his illegal television station is already working to change people's view of fiction and fantasy.  When things start to go just a little haywire the Doctor is forced to admit that sometimes, fiction can be dangerous.

Of all of the 9th Doctor books, The Stealers of Dreams is easily my favorite, though there isn't much that is original about the plot.   In many ways, it's as though Lyons tried to rewrite 1984 and insert the Doctor.  The planet in question has no government but the rule of law is unbending and the status quo if fiercely maintained. Conformity is uniform with residents watching each other and informing on each other at every turn.  There are those who choose to rebel but they are quickly rounded up by the police and their materials dismantled.  For this world to work, it's important that everyone think the same way and express a desire for truth and rationality in all forms.  The news reports things like a woman not having to stop at any red lights on the way home and saving a full twenty minutes on her commute.

Despite the fact that the story was not original per say, I really enjoyed the twist ending.  I don't know whether it's because I got so caught up in how well written Rose, Captain Jack and the 9th Doctor were or not but I completely didn't see it coming and was blown away.  In reflection afterwards, I will admit that I should have been able to see it.  If anything, it speaks to how caught up I quickly became with The Stealers of Dreams.

At points throughout the novel Rose was constructed as a Mary Sue.  This would normally piss me off but she seemed to push back very hard against this construction.  Rose meets Dominic when he breaks into the hotel room that she shares with Captain Jack and the Doctor to hide from the police.  Later in the absence of Captain Jack and the Doctor, Rose decides to investigate the world with Dominic.  It's clear from the very beginning that Dominic is very socially awkward because of his non compliance and interest in fantasy and this makes him decidedly unattractive to women. Dominic repeatedly tell us that he finds everything about Rose perfect but it's clear that his ideas on women are really and truly sexist.  When the two find themselves in danger of being caught by the police, Dominic assumes that as a man, it's his job to protect Rose.

Rose being Rose gets ready to defend herself despite Dominic's protestations.  She's certain that she's onto something about how the world works and refuses to be taken by the police.

Dominic's attitude about women don't stop at his belief that it's a man's job to protect a woman.

‘Which of these is yours?’

‘The comic strip,’ he answered distractedly, over his shoulder.

‘The zombies? It’s. . . er, good. Well drawn. But you do know women don’t really look like that? And if we did, we wouldn’t dress like that.’

‘It’s stylistic. It’s how they used to portray females in literature.’

‘I s’pose, on the next page, the zombies tear off her clothes and she’s rescued by some hunk and falls into his arms.’

Dominic broke off from what he was doing to turn and stare. ‘You’ve studied the classics?

In a society without any government it's clear that the media controls how people think. What's particularly telling is that for Dominic, though he actively chooses to protest against the media and society's limitation regarding fiction, he doesn't stop to think about what he is internalizing from the fiction he chooses to consume.  It takes Rose to point out that the presentation of women is problematic. I love that Lyons had Rose push back against this misogyny and it's rare that sexism is so directly confronted in NuWho.