Midnight, Rise of the Black Vampires by M.G. Hardie 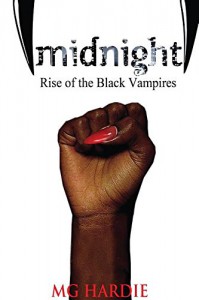 Amber Wharton is caught in throes of change thanks to her vampire nature and puberty.  Once realising that there are things that Amber needs to learn that she can only learn from a female vampire, without consulting her, Amber's parents decide that she is going to live with her mother. Amber is at first anxious about starting a new school and leaving behind the life she carefully crafted in Beverly Hills.  As it turns out, the move to a new school gives Amber the opportunity to not only study humans but to understand what it is to be a vampire and vampire history.  The thirst calls to her and she learns about self control, as she scales tall buildings lost in thought, Amber is becoming so much more than she realises. Like a butterfly emerging from a cocoon, for better or worse, Amber must come to terms with who she is and what limitations and freedom it grants her.

Midnight, Rise of the Black Vampire does not disappoint when it comes to racial inclusion. Not only is Amber an African-American vampire, the story is littered with cultural markers that never leave the reader doubting her identity.  It reads as an authentic experience, as we learn about Amber and her friends being routinely stopped by the police for having the nerve to walk the streets as people of colour in a white supremacist police state.  Everything from the music, to the language affirms Amber's identity as a person of colour.  This is a refreshing change, as more often than not, when stories include Black women, they often read like White woman painted Black for inclusion cookie points.  I found myself relating with much of Amber's lived experience.

Hardie spent a lot of time with world building.  We learned the origin story of vampires and its ties to religion, and relationship to the Christian God.  That said, there was an annoying amount of name dropping as Hardie constantly made Black historical figures vampires and interjected Amber's mother into historical scenes.  It made me feel like I was reading Forest Gump but for people of colour in that regard. What was the point of saying that Bass Reeves, Jean Baptiste Point de Sable, and Ludwig Van Beethoven were vampires for instance, when it didn't add anything to the story? To some degree, one has to suspend belief to read a story like this but Hardie took it a touch to far and it kept pulling me out of the story.

What I found odd was the constant assertion that Black vampires were the epitome of vampire society, even though millions died during the middle passage. Hardie tended to blame everything evil on humans but the challenges that his characters faced were the fault of White supremacy. Midnight, Rise of the Black Vampires floats back and forth between a PSA about how hard it is to be Black in America, even as it seeks to elevate Blackness as the ultimate form of vampirism.  Hardie continually reminds the reader that in terms of hierarchy, white vampires and even more specifically albino vampires are the lowest tier.  It made me wonder if Hardie understands that someone can be both albino and Black? The fact that albinos were specifically cast as savage, animalistic and violent serves to reify some of the negative stereotypes associated with albinism.  Attacking an already marginalized group in this fashion to assert Black superiority is indeed problematic.


At 216 pages, Midnight, Rise of the Black Vampires is a fairly short story but it took me forever to read.  I should have been able to speed through this in a day but it dragged. I quite honestly considering just putting this novel aside at several point.  I kept hoping that somewhere along the way that Hardie would include some kind of plot in his story.  Yes, I think it's important to talk about police harassment, the school to prison pipeline, poverty and even young women getting pregnant in their teen years, but none of that amounts to a plot.  At times, Midnight, Rise of the Black Vampires felt like one PSA.