Chosen (House of Night #3) by P.C. Cast and Kristin Cast 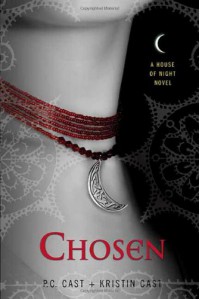 Of course that has to take a back seat to her constant conflict over three different love interests.

The People of Faith also seem to have decided they hate vampires, but, really the love interests are way more important

However, now I can be somewhat positive, because there are some definite improvements in this book, especially Aphrodite. So far she has portrayed in the most grossly misogynist of terms and treated as a parody of a terrible person, here we actually get to see her as a more of a person. Sure, she’s not exactly a very pleasant person, but she is a person rather than a monster in human form. She’s actually far more developed than Zoey’s friends who are little more than mindless drones worshipping her every move.

So Aphrodite finding her own personality, being involved in the plot even if it is in the path of “redemption” for not being a good follower of Zoey in the first place. Even better, not only is Aphrodite not just a caricature of evil and awful, but she actually challenges Zoey in ways that don’t just come down to her being super evil and terrible. She challenges Zoey and she may be right – and she challenges her on several levels: She pokes at Zoey’s ridiculous refusal to cuss and her massive slut shaming and even demands the whole group see sense when they’re busy bickering. Now we have Aphrodite as part of team good-guy which means hopefully we will continue to have a character who will challenge Zoey in the future.

Another nice moment is when her friends actually challenge her over the secrets she’s keeping. Sure, they’re obviously wrong and mean and don’t understand – but this whole series is so saturated in evil people vs sycophants that just seeing someone challenge Zoey who isn’t evil personified is an amazing relief

See, this is the problem with this series – it sets the bar so damn low than it is incredibly easy to be pleasantly surprised.

Like the previous books in this series, this book is sorely lacking in plot – and actual active involvement in said plot.

We have three main issues du jour – Neferet, the boss of the school is apparently evil despite being a High Priestess of Nyx and Nyx not doing a damn thing about this (slacker goddess can give Zoey stomach cramps of guidance but not stop Neferet running rogue?). Secondly we have Stevie Ray, one of Zoey’s sycophants, who has turned into an undead evil thing and Zoey would rather she wasn’t. And then there’s the love square that makes my eyes roll so much that I get friction burns. So how do these plots progress?

The first one doesn’t. Neferet is constantly used as an excuse to not tell anyone anything without any real indication of why that is so or how it justifies secrecy. It just is.

On the second plot – nothing happens until Deux Ex addresses it. Seriously we have a whole lot of angsting and woe and worry – but every time she considers researching or actually doing something about it, she’s distracted by her convoluted love interests. So she does nothing but fret until WOOO GODDESS POWER!

And this is something I loathe about the plots of these books. There’s no work, action or agency from Zoey or her friends – everything is decided by Nyx, the Irritable Bowel Goddess. She needs to decide whether to say anything? Divine stomach roil. Needs to solve something, goddess intervention. Needs to decide what to do? Goddess cramps. Zoey doesn’t do anything in her own right, she’s just a puppet being manipulated by the goddess inside. Which really does make Nyx not acting in other ways so ridiculous. Is she a hands off goddess letting her people work with free will, or is she getting in her little vampires’ business and micromanaging them?

And then there’s the love interests – each more terrible than the last.

Can someone please acknowledge that her relationship with Heath is predatory? She has “imprinted” on him basically making him addicted to her and crave her touch. She continues to meet with him. She refuses to break it off – she refuses to free him. She keeps going back to him, keep drinking his blood. She recognises it’s wrong – but she recognises it is wrong for the wrong reasons: She is seeing it is forbidden for fledglings and humans to be together, but completely fails to recognise the control she has over him or the abusive dynamic it creates.

Then there’s her relationship with Loren. Now, they do finally consider this relationship to be a problem and that Loren is deceiving and manipulating Zoey with his own agenda. And yes that is certainly a problem and he is terribad awful. But it kind of misses the elephant in the room that absolutely no-one is willing to acknowledge except in a passing moment before handwaving it because Zoey is just so special and the teacher is just so hot that we’re just going to ignore the whole problem of a teacher preying on one of his students.

And finally we have Erik who remains the one appropriate love interest who turns into the terribad jealous slut shaming arsehole over her other boyfriends. Now, I’ve already mentioned the many many many many reasons her other relationships need tearing down and, “waaah I’m jealous and you’re a slutwhorejezebel” is not one of them.

He only bright light in that relationship is, shockingly, Aphrodite who calls out exactly how self-absorbed Erik is.

This is also the book where Zoey loses her virginity – and it’s predatory, manipulative and takes advantage of her while she’s at her most vulnerable. It’s a terrible scene – and it’s not made terrible by the person she’s with, it would be terrible with any of the men.