The Journeyman (The Commons #1) by Michael Alan Peck 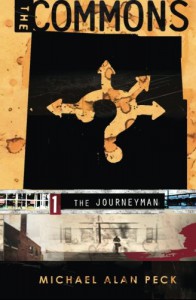 Paul, Anna and Zach all died in a tragic accident

But the afterlife is not all good. Once the Commons where all people gathered to complete their Journey and find out where they’re going next. But now Mr. Brill controls the Essence of life and creation, their power, the potential of their journeys all trapped and enslaved to increase his power and control and create his corporate empire.

These three have the potential, together, of finally loosening Mr. Brill’s stifling grip and restoring things to their natural balance.

In some ways we have a classic adventure story – with a normal boy, Paul Reid, discovering that he is so much more special. He enters the Commons as a normal person and discovers how very very special he is as he goes along, gains new powers and collects companions who are super loyal to him

It’s classic – but things are classic for a reason; it’s the every man adventure story that is often fun when done well – and this is definitely done well. What makes it special is the world.

This huge world that is made up of the imaginations of everyone who has ever passed through is so random. In a wonderful way. Whether it’s the ferret whisperer or the Mososaurs or the hippie soldiers (I LOVED the hippie soldiers in their peace symbol uniforms) and the humbolt squid and so many other random images and creations. It works because The Commons is created from the minds of so many people, everyone who has died and passed on to the next journey

It is fascinating and rich and incredibly fun and zany and the sheer vastness of it makes it an excellent read. It also combines with the complex, multi-faceted plot with three different figures all doing seemingly very different things to bring about the end result – all their missions are connected but in a world that is so outside of normal rules that the connections are almost impossible to see until the end.

I’m torn on this. On the one side it’s amazing, it looks amazing, it’s fun, it’s wildly imaginative and incredibly vivid. At the same time it feels almost like a cheat – but having a world with no parameters, no logical connections, where literally anything mankind can imagine all exists then you also don’t particularly have any onus to create a coherent world. In fact, a coherent world is quite the opposite of what is – because we have all these remnants of imagine smooshed together, all these disparate sources of Essence striving to communicate and fight against the repression of all their infinite potential. This is what makes the book so much fun and so different – because it’s so vivid and bright and random. But it also means that you have infinite supplies of Deus Ex Machinae. There comes a point when you don’t even try to follow the logic of the plot any more, just watch, enjoy and run with it because no-one ever said it had to make sense

And I don’t know if that’s a frustration or an excellent thing. In a way it also underpins the whole conflict of this book. Mr. Brill is order – he is oppression and stagnation and control and predictability. Through him you can even see why, in the early days, people supported him. But the Commons, the Commons and Essence in its true state is wild and random and immense and varied and diverse and strange.

So, despite the waffling back and forth I’m going to say just run with it and enjoy every minute of the fun and joy and wildness and the deep conflict between control and randomness, order and individuality, uncertain dreams and certain yet grim structure.

From his world we also had some interesting concepts – the idea of people who are “Bona Fides” or “Mythical” – people or imaginative creations – but does that make them any less people since they’re still made from essence – just because they were shaped and born differently? I actually think it’s a threat that could have been followed more

One interesting element if this was Po. Po is an Asian man and a huge stereotype (a POC, and the only one I can remember in the book). Which is kind of the underpinning of his character – he’s a Mythical creation from an old 70s martial arts film with all the dubious characterisation inherent to that. He doesn’t speak, he uses sign language simply because he finds the gross stereotypical dubbed language he has to use to be demeaning. He does his utmost to resist what he is created, he’s a stereotype openly rejecting being the stereotype and trying to forge his own character despite the stereotype. It’s an interesting conflict.