The Ties That Bleed by Jami Deise 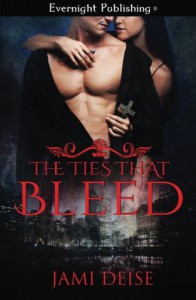 Diana Rowan was a vampire assassin, part of the FBI’s squad specialising in destroying vampires. Then she married Robert, had a child, Katie and took a desk job training new recruits. It’s a happy life… but missing someone

This book almost reads like an origin story for me – even though the main character, Diana, has been a vampire hunter/executioner/trainer for some time. This is clearly the start of a whole new chapter of her life, and setting her up for the new series revolving around her in her new life

Despite that, it didn’t feel temporary or transitory. A lot of origin stories will introduce characters and you know most of them won’t be relevant or will be replaced or will change rapidly. It can be a barrier to get invested in them – you see the character starting a series in domestic bliss, know it’s not going to last so the characters that make up that domestic bliss are not exactly people I’m inclined to get to know.

But Diana’s marriage and her life and her family are all such excellent parts of her development, her origin and really contribute to who she is. Especially since it isn’t blissful and I felt like it could have continued.

The central concept of the book is one of very every day sexism. Diana was a vampire executioner, she worked for the FBI as part of its secret supernatural police unit and, like many working women, she chose to change her job (and become a trainer rather than the more dangerous, irregular hours and taxing role as an active duty agent) when she had a baby. I think there is a lot of excellent balance in how this life is depicted. Her husband, Robert is not a terrible person and she’s not unhappy – far from it. But she does have moments of frustration, this isn’t entirely the life she wanted even if she enjoys it, and there are parts missing, parts she does miss from her job before she benched herself. She’s not miserable or sad or angry – but it isn’t perfect.

We also see that not-perfect fray and show all of its sexist flaws when Diana begins to return to her old job, become more active and the cracks show. And it doesn’t require Robert to become all Gorian on her to get the point across – it’s much more subtle and pervasive than that: and not just from him, but her own instincts and assumptions. Like when he is working late is it assumed, when she is working late it is a vast imposition. When he looks after their daughter it’s him doing extra, when she looks after their daughter, it is her job. When she stays home with her, it’s the normal acts of a parent. When he stays home with her it’s “baby sitting”.  As she tries to spend more time to do her hunting (exacerbated, of course, by her inability to tell Robert what she is doing) the cracks and the strain grow more and more. It’s all fuelled by his expectations of what she should be as a wife and mother and even her own expectations and assumptions imposed upon herself.

This ongoing theme also touches on some of the other women in the book and their relationships – from Val the superhunter and her determination not to have relationships (but not necessarily through choice but because of these pressures) to Melinda and her relationship breakdown again because of the pressures of where they work and the secrecy they have to maintain.