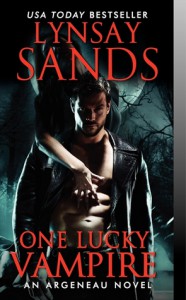 Nicole Phillips, the daughter of Margarette's maid is getting a long overdue divorce and putting her life back on track.  The problem is that someone doesn't seem to be pleased with the changes Nicole is making.  After several attempts on her life, Margarette is convinced that the naive Nicole needs to hire a body guard but Nicole doesn't agree.  Margarette finally convinces Nicole to hire a housekeeper/cook to help her with her busy schedule.  Margarette contacts Jake, who has been estranged from his family since his turn and talks him into guarding Nicole.  What neither of them realise, is that Margarette is playing match maker again.  Can Jake manage to keep Nicole safe while he works out his issues with being immortal and struggles to come to terms with the fact that he has just met his lifemate?

One Lucky Vampire, is another in a long list of formulaic Lynsay Sands books.  If you have been reading this series for awhile, you're completely familiar with the drill.  Immortal meets mortal, discovers their lifemates, a few problems arise and then boom eye boners and HEA.  I've read Harlequin romance novels that are more inventive than this series.  I know that Sands has to make these books accessible to people who decide to pick up the series along the way (who picks up book  19 of a series and says, "I think I'll start reading here"?), but the explanation that Jake is an immortal is just long winded and drawn out.  I found myself quickly skimming, having read this bloody explanation so many times already. I am also sick to death of Margarette playing matchmaker.  At this point, Sands needs to find a new hook to put her lovers together.

From almost the beginning of One Lucky Vampire, attempts are being made on Nicole's life but she has a reasonable explanation for each incident.  It's one thing to be laid back, but Nicole is ridiculously calm.  We see this again when Jake finally tells Nicole the truth after being badly poisoned from sitting in her hot tub.  So, Jake tries to bite her, and she sees his fangs, learns that there are immortals and just lets it soak in as though it's no big deal.  The calmness with which she accepts this is ridiculous.  Nicole is actually more worried about meeting Jake's mother and being thought of as a whore, than with the knowledge that immortals actually exist.  She doesn't even give much thought to Jakes suggestion that she become one, other than her fear that it might hurt.

In terms of female love interests, beyond Nicole's lackadaisical attitude towards her impending murder, she's not as bad as some of the women Sands has chosen to introduce us to.  Nicole is a talented artist and a successful woman and though she does have some issues with her weight, she's not constantly harping on it.  I did however dislike that she thought she needed to diet the moment she found herself attracted to Jake?  What is it with Sands and her inability to create a love interest who is secure in who she is?  Nicole also suffers from a near constant worry that she is a whore for having so quickly slept with Jake.  Of course, Jake's mother suggests that it's all the fault of the nanos and therefore informs Nicole that she is not a whore.  This just got on my last nerves.  Why couldn't Nicole have simply slept with Jake because he turns her on, rather than all of the bullshit slut shaming?

What Nicole lacked in physical acceptance, she made up for in financial independence. During her marriage, Nicole was the bread winner and she takes great umbrage to the idea that she simply got the house in the divorce, rather than the house simply belonging to her, as a result of her hard work.


What I want to know is where Nicole's common sense went.  Nicole has known Margarette since was a child and somehow believes that Margarette has children in their late 20's, while Margarette looks to about that same age herself.  Even if Margarette married Jean-Claude when she was 13, the math doesn't add up.  Why didn't that ring alarm bells for Nicole?

Jake is the typical slightly broken male love interest.  In Jake's case however, I really felt his issue with being lied to by his family about the Notte's being immortal, while reading his mind and controlling him for years is something he had a right to be upset about.  Yes, he was dying but he wasn't consulted about whether or not he wanted to be an immortal.  Sands made it seem as though Jake was simply being a spoiled whiny brat but the truth of the matter is that his issues with the Notte's were more than reasonable, particularly given that they spied on him when he separated from them for seven years ago. Good intentions don't erase a violation.  I don't like that Jake apologised to them in the end because it made it seem as though he did something wrong. The issue isn't that the Notte's are immortals but that they violated him repeatedly. On a final note, Sands really needs to get her editor to check for continuity in her series.  With 20 books under her belt, it must be difficult to remember all of the facts, but as far as I can remember, Jake did thank Vincent for saving his life in a Bite to Remember, even if he wasn't thrilled with being an immortal.