The First Twenty by Jennifer Lavoie 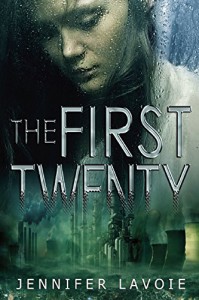 The world has fallen apart. It is twenty years after the fall of civilisation, there’s only a few scattered remnants of humanity left who are trying to struggle to survive and, maybe, rebuild.

Peyton is the newly elected leader of her Settlement’s security, they’re trying to rebuild and keep themselves safe from raiding Scavenger looking to steal their resources. One raid recently killed her father

Nixie is a Scavanger, desperate, under-resourced and driven to scrape what living they can. The Settlers seem to live a life of high luxury in comparison and the resentment is strong.

This is a post-apocalyptic dystopian world – humanity has been driven to the brink of extinction, the cities are abandoned and the remaining people are desperately trying to struggle to survive in the ruins.

And I really like this dystopian world – I like how it focuses a lot on the practicality of surviving and the possibility of rebuilding. Not with lots of despair and angst and “are we living or surviving” (yes this genre is really getting over-stuffed) but simple practical matters like how they’re producing food and finding clean water and standing together. It’s a lot less militaristic than many, far less combative and far more about survival.

A lot of apocalypse fiction loves to realy make a huge point that it’s not the zombies/vampires/plague/hockey-stick-wielding-were-beavers that you need to worry about but other people who are evil murdering raping arseholes. Usually with all the subtlety of a chainsaw wielding guy wearing his last victim’s skin.

And that kind of savagery is certainly not an unrealistic message – but this book looks more at communities coming together. Sure, it’s not perfect but the community tries, it is genuinely coming together and supporting each other and collaborating in the face of this difficult new world. We have a community of people that doesn’t need one leader to keep everyone in line with the threat of violence. We have different communities working with each other, trading, co-operating and not trying to fight each other or scrabble for advantage.

That’s not unrealistic either. Time and again history has shown us that people have faced terrible conditions and rallied wonderfully together. When faced with adversity people ARE good at rallying and supporting each other – it’s how communities started. It’s nice to see a world where humanity isn’t 3 days without a wifi connection away from eating their neighbours brains (now, cut my wifi AND my coffee and your brains are fair game). Not everything has to be grim and gritty to pretend to be “realistic”.

The story covers these two characters from very different backgrounds both pushed together and on a fairly standard quest storyline. But the quest and the world is very much a vehicle in which to examine these characters.  We have Peyton, a settler, struggling with her new responsibility of leadership while still recovering from the grief of her dad’s death. Nixie, a Scavenger, has a special ability to find water living under the total control of the dictatorial command of the perhaps unstable leader of her nomadic band desperately trying to scrape by. Together they learn different lessons – with Nixie realising there is a way to survive without being under the total command of someone, how not every part of your life needs to be controlled for survival as well as realising her leader’s lies were meant for control. While Peyton receives some hard lessons about class and possessions; even in this dystopian world. Her settlers have things that Nixie can’t even imagine, in fact her band of scavengers successfully raid Peyton’s settlers for supplies that Peyton’s settlers don’t miss. They can’t even figure out what has been stolen because they have that as a level of excess that the Scavengers can’t imagine.

This puts both Peyton and Nixie’s opinions through a radically different lenses which leads to a lot of very good character growth, conflict, examination of prejudices and preconceptions as they both learn to see their worlds very differently, understand each other and slowly fall in love

And while I do think the romance, in some ways, feels out of place, the way it is developed is very nice and natural and comes with a lot of real feeling and powerful connection between the two. Another element I like is that their love for each other and description of each other fits the setting. Peyton isn’t small and delicate with smooth skin – she has muscles and definition and calloused fingers and looks far older than her 18 years. And Nixie, though far more stereotypically beautiful, she is similarly small due to being undernourished from having to scrabble to get by. It’s a sweet romance and an excellent one between two women.