Under a Vampire Moon (Argeneau #16) by Lynsay Sands 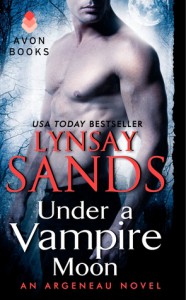 After getting out of a loveless marriage, in which she was controlled, lied to and emotionally abused, Caroline is trying to move on with a Caribbean vacation.  Unfortunately for Caroline, St. Lucia seems to be littered with honeymooners and with her traveling companion not feeling well, Caroline has plenty of time to spend on the beach wondering how she ended up over 40 and alone.

When Christian Notte gets a call from his mother Margarette, to inform him that  she has someone she would like him to meet, Christian doesn't hesitate to drop everything and head to St. Lucia.  Margarette seems to have a knack for helping immortals find their lifemate and Christian cannot wait to see if she has done the same for him.

As all things that come with finding a lifemate, things quickly take a twist.  At 40, Caroline is very nervous and scared to be hurt.  She's highly aware of her age and when the youthful looking Christian catches her eye, she knows that she shouldn't be with him.  Now that Christian has found his lifemate, he must woo her and help her get over her fears but he has to get close to her first.

At this point, the Argeneau series is incredibly formulaic even for a paranormal romance novel. Since Caroline is human, she doesn't know anything about the immortal society and thus believes Christian to be almost 20 years younger than her.  Age is a huge hangup for Caroline.  She's obsessed with crows feet and cellulite on her thighs.  Her constant worry is that people will think that she is a cougar and judge her for being with Christian.  The soundtrack to her brain is all insecurity and I found it exhausting to be quite honest. I can understand her hesitancy but Sands took it too far.

In any PNR there has to be a situation which delays the HEA and serves as some sort of plot.  In the case of Under a Vampire Moon, Sands chooses to have Caroline believe that Christian is gay.  The idea is that Caroline will relax, secure in the knowledge that she is with a man who doesn't want her sexually.  Uh huh.  She's so lonely on vacation that she thinks it would be fun to play the role of beard for a hot young gay man.  Uh huh.  And why does Christian need a beard?  Well, because his family will reject and possibly disown him if they discover his sexuality.  Uh huh.  I know, take a deep breath.

Up to this point in the series,  Sands has only had one gay couple mentioned in passing.  On several occasions, she has used either  mistaken sexuality or outright implied that a character is gay as the stumbling point and to illicit laughter.  I for one, don't find it funny that Sands thinks the very real fact that LGBT youth are rejected by their families and left homeless because of their sexuality should be used as fodder in this fashion.